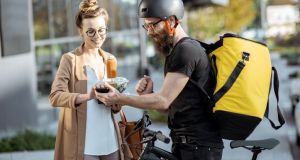 The Labour Party said it would tackle the gig economy and eliminate bogus self employment. Photograph: Getty Images

The Labour Party has said it is looking closely at the introduction of a four -day working week without any loss of pay.

It also said it wanted to put in place an additional two public holidays each year to allow workers spend more time with their families and friends.

Labour Party employment spokesman Ged Nash said there was no public holiday between the beginning of January and St Patrick’s Day or in July in the middle of the summer. He said Ireland already had fewer public holidays than elsewhere across Europe.

Mr Nash said raising the minimum wage towards a real living wage, guaranteeing the right of all workers to be represented by a trade union and maintaining the State pension age at 66 years would be absolute requirements of the party in any future talks on coalition or support for any minority government.

The Labour Party also said it wanted to introduce a right to flexible working hours and a right to switch off from dealing with work-related emails and phone calls outside working hours without receiving additional money.

Mr Nash said people were being enslaved by new technologies.

He said the party would establish a commission on the future of work. He said research the party had looked at indicated that a four-day week would make workers more productive and improve the bottom line of employers.

“Everyone would be a winner”, he said.

Mr Nash said the Labour Party would ask the Low Pay Commission to set out how the national minimum wage would remain above two thirds of median income as was originally the case in 2000.

Mr Nash said employers would be required to negotiate with trade unions and everyone at work would have the right to union representation. He said the party had consulted with lawyers and academics and did not believe a constitutional amendment would be required to bring this change about. However he said if necessary the Labour Party would hold a constitutional referendum in the issue.

He said the Labour Party would tackle the “gig economy” and eliminate bogus self employment and “if and when” employment arrangements.