Contest for final seat may be between two Fianna Fáil candidates 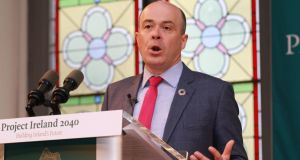 Denis Naughten, who resigned as minister for communications in 2018, is expected to retain his seat. File photograph: Nick Bradshaw

Roscommon-Galway is a constituency with a contrarian streak, where voters have often favoured outspoken Independent candidates in the past and are likely to do so again.

Independents have topped the poll in the past two general elections in a constituency that has seen its boundaries redrawn and shift several times in recent years.

Last time out, Independent Denis Naughten was first over the line, followed by Michael Fitzmaurice (Ind). Fianna Fáil’s Eugene Murphy took the last of the three seats, with all three incumbents running again in this election.

Fine Gael Senator Maura Hopkins was neck-and-neck with Murphy for the last seat in 2016, losing out on the eighth count. However, earlier this month she announced she would not be contesting the general election, following the birth of her first child before Christmas.

Hopkins’ decision not to stand will be a significant blow to Fine Gael’s ambitions to win a seat. The party’s candidate councillor Aisling Dolan hails from the Galway end of the constituency in Ballinasloe, and only joined Fine Gael last November.

Naughten, a former Fine Gael TD who lost the whip in 2011 over the government’s decision to close Roscommon County Hospital’s emergency department, will pull votes from Fine Gael.

He also resigned as minister for communications in 2018 after it emerged he had attended several private meetings with David McCourt, the head of the sole remaining bidder for the national broadband contract.

Despite initial fears the controversy could endanger the procurement process for the project to deliver broadband to rural Ireland, the €3 billion contract was signed late last year.

Roscommon-Galway has a large agricultural base of mainly sheep and suckler farmers. High-profile farmer protests over beef prices has captured headlines in recent months – with tractor blockades on several occasions bringing Dublin city to a standstill – and anger over beef prices will be a local issue in this race.

Pressure on healthcare services and hospitals, as well as the provision of broadband to rural Ireland, are also likely to be issues on the doorsteps.

The local election last May saw an increase in Independent candidates elected to Roscommon County Council, bucking a national trend which has seen support for non-party candidates wane in recent years. Against that backdrop, both Naughten and Fitzmaurice are in strong positions to retain their seats.

Sinn Féin’s candidate Clare Kerrane (27) typifies the younger generation of politicians the party has been keen to push to the fore in recent years. A politics graduate from NUI Galway she is employed as a Sinn Féin political adviser in Leinster House.

She was just outside of the pack in the hunt for a seat during the last general election, polling more than 3,000 first preferences. While not seen as a major contender to challenge for a seat at the outset of the election, Sinn Féin’s rise in opinion polls may significantly buoy her chances.

The fiercest contest in Roscommon-Galway for the final seat may be between the two Fianna Fáil candidates, Eugene Murphy and Cllr Orla Leyden. Leyden is the daughter of long-serving Senator Terry Leyden, and was added to the ticket by party HQ the week the election was called, to the surprise of the sitting TD Murphy.

It is said in politics, and perhaps acutely so in this race for the Fianna Fáil pair, that the most dangerous candidate is often your running mate.