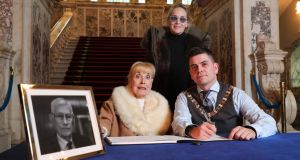 The funeral of Seamus Mallon, the former deputy first minister who was one of the architects of the North’s peace process, will take place in Co Armagh on Monday.

The Archbishop of Armagh and the Primate of All Ireland, Eamon Martin, will be the chief celebrant of the funeral Mass at St James of Jerusalem church in Mullaghbrack, near Mr Mallon’s native Markethill.

Mr Mallon, who was 83, died on Friday. He had been diagnosed with cancer late last year.

The noon Mass will be concelebrated by the parish priest, Fr Michael Woods. It will be broadcast on RTÉ’s NewsNow digital platform and live-streamed.

A former teacher, Mr Mallon was the deputy leader of the SDLP from 1979-2001 and MP for Newry and Armagh from 1983-2005. The SDLP’s chief negotiator in the talks leading up to the signing of the Belfast Agreement, he was Northern Ireland’s deputy first minister from 1998-2001.

A Catholic from a predominantly Protestant area of south Armagh, he was known for speaking out against violence on all sides during the Troubles, often at great personal cost; he suffered threats, intimidation and physical attacks towards himself, his family and his home.

Among those who paid tribute to Mr Mallon following the announcement of his death on Friday was the former US president Bill Clinton, who described him as “a hero of the peace process and a profoundly good man”.

Mr Mallon was, he said, “a teacher in practice and in heart. The lessons of his life and power of his example are as important today as ever.

“I will always be grateful for the opportunity to have known and worked closely with him.”

President Michael D Higgins said Mr Mallon had been a politician and activist of “unsurpassed courage, civility and fairness”.

He said few people had influenced the peace process more than Mr Mallon, who was “a formidable opponent and a tough negotiator in speech and act, but always honest and honourable”.

The former leader of the SDLP John Hume and his wife Pat said in a statement that history would remember Mr Mallon as “one of the great Irish patriots and peacemakers”.

“He was a man of huge strength and courage, who stood with John for many years in the fight for justice, peace and reconciliation on this island.”

Books of condolence have been opened in Belfast and Derry, where the SDLP leader, Colum Eastwood, wrote: “You planted the trees. Now it’s over to us.”

Among the first to sign the book of condolence in Belfast was actor Sharon Stone. She described Mr Mallon as “a legend, a real warrior of peace”. She wrote: “With respect and admiration.”