We have so much to offer Ireland, yet we seem to be an inconvenience best ignored 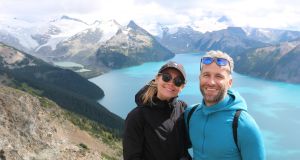 Ruairi Spillane with his girlfriend Lenka in Canada.

The general election is in full swing, and a number of trends are beginning to emerge. However, as an Irishman living in Canada, my biggest takeaway of the campaign to date has been the complete lack of attention given to Irish emigrants from either of the two candidates vying to be Taoiseach.

As a proud Kerryman with family and friends living at home, I fully understand that issues such as the ongoing housing and hospital crises will take precedence in a general election campaign, and rightly so. But the fact that next to nothing has been said about the thousands of Irish citizens like me living outside of the country is disappointing to say the least.

Through my work in Canada, I get the chance to speak to a countless number of Irish emigrants each week and know that many are considering moving home in 2020. For these individuals and families, the silence has been truly deafening.

Most people know someone close to them living abroad. So it surprises me how little discourse there has been around Irish emigrants in the election campaign to date

When I left Ireland for Vancouver in early 2008 the good times were still rolling, but, as we all know, that didn’t last too long, and within a couple of years mass emigration had become the new norm. More than a decade later, there was supposed to be a referendum to decide whether voting rights should be extended to citizens living abroad for presidential elections, a right that almost all other EU countries offer their citizens.

This referendum was initially scheduled for the spring; it was then pushed to October and finally shelved indefinitely due to uncertainty around Brexit. This general election has reduced the likelihood of it being called in 2020, and to be honest I worry that it might not happen at all.

Irish abroad on election: What issues are concerning you?

Successive Irish governments are quick to speak glowingly about our country’s global footprint and the vital role played by the diaspora, including recent generations of emigrants who have left. However, when it comes to extending voting rights, recognising prior PRSI contributions for maternity benefit entitlements, or smoothing the eligibility process for those looking to upskill upon their return, Irish emigrants appear to be little more than an inconvenience best ignored.

One point that is often lost in the debate about how much of a say Irish emigrants should have in the country’s future is the real impact that migration can have on families and communities across Ireland. For every Irish person living in Sydney or Toronto, there is often a family, GAA club or community at home affected by their decision to leave.

The likelihood is that anyone reading this story will know someone close to them living abroad. Given this fact, it surprises me how little discourse there has been around Irish emigrants in the election campaign to date.

The impact returning emigrants can have extends far beyond the economic. We owe these emigrants and their families the chance to make a real life for themselves

In my view, the positive impact that returning emigrants can play in Ireland extends far beyond the economic sphere. I feel that we owe these emigrants and their families the chance to make a real life for themselves should they wish to return home. Doing so could add energy and vitality to parts of the country badly in need of a boost, but it won’t happen without a proper plan being put in place.

It’s easy to forget that more than 400,000 Irish emigrants left the country in the last decade or so, and the sad truth is that many have stayed away. I feel that we are often simply regarded as collateral damage from the collapse of the Celtic Tiger, and I’m sad to say that our voice has been muted in this election campaign so far.

Some people I talk to in Canada and at home think that Fine Gael’s nine years at the helm of Irish politics may be coming to an end, but do Fianna Fáil offer any real alternatives that will assist returning emigrants? And what about the thousands of Irish citizens who continue to live abroad? Will we have the opportunity to play a more active role in the future of our country under a Micheál Martin-led government?

The answers to these questions may not be answered during the remainder of this election campaign, but I hope that they are, at the very least, part of the conversation.

Ruairi Spillane, who is 36 and from Beaufort, Co Kerry, emigrated to Canada 12 years ago; he is the founder of moving2ireland.com and moving2canada.com.