Islands go to the poll: turnout slow in abortion referendum 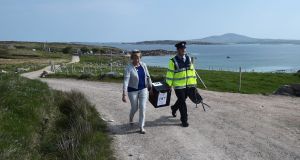 Twelve offshore islands on the west and north-west coasts have begun casting votes in the referendum on the Eighth Amendment today.

Air Corps helicopters flew ballot boxes out to the Donegal islands of Tory and Inishboffin this morning, where just over 200 people are registered.

On Mayo’s Clare island, polling clerk Padraic O’Malley confirmed that over 20 of 120 voters had cast their ballots by lunchtime.

“We opened at 9am and we had people in before the morning ferry,”he said.

Although the west coast islands are campaigning to vote with the rest of the State, the timing suits Clare island residents in this instance as islander Aisling O’Malley is due to be married on Friday in Mulranny.

On Donegal’s Inishboffin, voting was slow by lunchtime, with just four votes cast among 63 registered voters.

On the Galway islands of Inishbofin, Inis Mór, Inis Meáin and Inis Oírr, a number of residents received two polling cards in error – one for Thursday May 24th and one for Friday, May 25th.

Former Gaeltacht and island minister Éamon Ó Cuív said he had established that this was an error by Galway County Council.

Mr O Cuív has initiated legislation to allow all islanders vote on the same day as the State, on the basis that improved transport and communications should allow for this.

The 460 registered voters on Bere, Cape Clear, Dursey, Hare and Whiddy islands, along with Long Island and Sherkin in the Cork South-West constituency cast their ballots with the rest of the State on Friday.