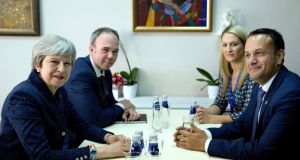 Theresa May has set out in broad outline to Taoiseach Leo Varadkar long-awaited new British proposals on post-Brexit customs arrangements.

The British prime minister is expected to put them in written form to EU negotiators within the next couple of weeks.

Mr Varadkar refused to be drawn on the details of the proposals which have been the source of major disagreements in the British cabinet.

However, the Taoiseach welcomed what he called the new insights into UK thinking.

“Any move on customs that brings the UK closer to the EU is to be welcomed,” he said.

Mr Varadkar said he told Ms May he could not comment on the proposals until she put them in writing. After that, he said, “we can give an intelligent or measured view of it”.

He put down a clear marker on the single market which suggested that Ms May’s proposals were narrowly limited to customs issues and would have some way to go to meet Irish and EU requirements.

“Customs is a huge part of avoiding a hard border between Northern Ireland and Ireland,” he told journalists in Sofia, Bulgaria. “While it’s a huge part of securing free trade between Britain and Ireland, it isn’t the only part of it. The single market is important as well as aspects related to regulation.”

The pair met on the fringes of a European summit where Ms May also had meetings with the presidents of the European Council and Commission, Donald Tusk and Jean Claude Juncker.

The former is also reported as having declined to pass judgment on Britain’s new plans insisting Ms May would have to put them in “black and white”.

Mr Varadkar said that ahead of the European Council summit in June “a lot of work is still to be done if we’re going to make the ‘substantial progress’ that we need to see in June, particularly around the issues of customs and the customs element of the backstop”.

Irish sources have been suggesting that a clear vision of how the UK sees the backstop being implemented needs to be on the table in June; yesterday’s proposals may form part of that, once elaborated on.

Asked if Ms May understood Irish concerns about regulatory alignment, the Taoiseach replied: “She does, yes. Certainly after today....”

“I said to the prime minister that any move that the UK might make that would help to align all of the UK and the EU in terms of customs into the future would be beneficial, would help solve some of the problems in relation to the Border but not all of them. It would certainly help us continue to trade between Britain and Ireland much as we do now, but it wouldn’t solve all the problems.”