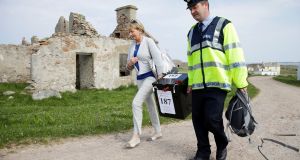 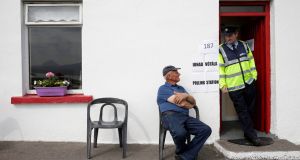 Garda Pat Mcllroy chats to Jimmy Sweeney as he waits to cast his vote in the referendum on the Eighth Amendment, on Gola Island. Photograph: Reuters

Both Yes and No campaigns have been holding events in Dublin on Thursday as the two sides prepare for the final day of campaigning before voting. Both sides are making their final appeals to voters ahead of the moratorium on broadcast coverage, which begins on at 2pm on Thursday.

The ballot boxes are open from 7am to 10pm across the country and the results will be counted on Saturday morning.

Taoiseach Leo Varadkar said a Yes vote in Friday’s referendum on the Eighth Amendment can help lift the stigma for 170,000 women who have travelled abroad to seek a termination of their pregnancy.

Mr Varadkar insisted he was not taking the outcome for granted but said he did not want to contemplate a No vote.

There has been a legacy of shame in this country and the passage of this referendum will assist those women, he said.

The Taoiseach added: “A No vote would send out the wrong message, not just to women but to society.”

Fine Gael members advocating a Yes vote gathered for the final time to encourage people to vote Yes in the referendum to repeal the Eighth Amendment and lift the Constitutional ban on abortion.

If there is a Yes vote, the Government will publish the final Heads of a Bill to regulate the termination of pregnancy by the summer and seek to legislate by the end of the year.

Mr Harris said he was confident the Oireachtas would support the law because “nobody has any alternative”.

He told The Irish Times there was no room for complacency from those advocating a Yes vote, insisting it would be an “extraordinary close” result.

The No campaign also made a final plea ahead of Friday’s vote, calling the proposed legislation “the most far-reaching abortion laws any Irish government has ever proposed in the history of the state.”

At an event on Kildare Street, Barrister Benedict Ó Floinn said “this is not a limited amendment but a demolition of a key right in our Constitution”.

“ This Minister for Health has published legislation which will be introduced if the Eighth Amendment to the Constitution is repealed; it goes far beyond dealing with limited difficult cases. The only way to prevent the adoption of an extreme abortion law is to vote ‘No’ tomorrow, Friday at the polling station.”

Fianna Fáil TD Mary Butler accused the Government of having “cynically used the tragedies of certain people to push through the most extreme abortion law ever propose in this country by any Irish government”.

“More and more people are realising that this government has planned to introduce an extreme abortion law, the only way to stop this is to vote ‘No’ tomorrow.”

Twelve offshore islands on the west and north-west coasts have already begun voting in the referendum on the Eighth Amendment.

Ballot boxes are also being delivered early to the three Aran islands and Inishbofin in Galway West; and to Clare island, Inishbiggle and Inishturk in the Mayo constituency.

The 460 registered voters on islands in the Cork South-West constituency - Bere, Cape Clear, Dursey, Hare and Whiddy islands, along with Long Island and Sherkin - cast their ballots with the rest of the State on Friday.