Sinn Féin leader Mary Lou McDonald joined a Border Communities Against Brexit group at a demonstration in Carrickcarnon on the Irish border, ahead of the UK leaving the European Union. Video: Simon Carswell 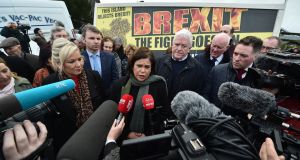 Sinn Féin’s Michelle O’Neill and Mary Lou McDonald at the launch of an anti-Brexit billboard on Friday in Carrickcarnon. Photograph: Getty

A poll on Irish unity was not an “exotic red line” for Sinn Féin entering coalition government but “an absolute necessity” after Brexit, said the party’s president, Mary Lou McDonald.

Speaking at a protest against Brexit on the Irish Border on the day the UK leaves the EU, the Sinn Féin leader said “preparations for constitutional change” on the island “needed to start”.

The party, in third place in the polls, closely behind Fianna Fáil and Fine Gael, has made a border poll within five years a condition of entering a government after the February 8th election.

Fine Gael and Fianna Fáil have repeatedly ruled out entering coalition government with Sinn Féin after the election.

Taoiseach Leo Varadkar has said that a border poll would be “divisive”, while Fianna Fáil leader Micheál Martin has said a border poll should happen “when the conditions are right”.

“I cannot understand political leaders or political parties who refuse to see what is in plain sight and that is that change is happening,” she told reporters at the protest led by Border Communities Against Brexit, the lobby group comprising people living and working along the Border, on Friday.

“I think responsible leaders and responsible politics plans for that, engages with that. You don’t bury your head in the sand and pretend that change isn’t happening. It is happening.”

Ms McDonald described Brexit day, Friday January 31st, when the UK formally leaves the EU at 11pm, as “a very sad day” given that 56 per cent of people in Northern Ireland voted against leaving.

It was “deeply troubling and very negative” that the consent of the people of Northern Ireland was being set aside, with the North being taken out of the EU with the rest of the UK, she said.

Even though a withdrawal agreement was secured, there was still a lot of anger and fear among Border communities because the “future is still very unclear”, she said.

“There was never any good Brexit for Ireland or happy-ever-after for this story,” she said.

Brexit was “a game-changer” as it completely “recasts and reshapes the political and economic conversation” across the island of Ireland and between Ireland and Britain, she said.

Ms McDonald said she had heard from people, particularly young people, on the doorsteps during the campaign who were “very keenly aware that things were changing and that Brexit had accelerated the conversation on Irish unity”.

“What Brexit puts up in lights is the extent to which partition endangers the economy, the society and politics of the whole island. That conversation has to be had about reunification,” she said.

She urged parties not to make the mistake the UK made with the “disorderly nature of the Brexit conversation” and to start talks on Irish unity “responsibly, thoughtfully, inclusively”.

“I don’t want to sleepwalk into disorderly constitutional change,” she said.

Unveiling a new campaign poster entitled “Brexit: the fight goes on”, Declan Fearon, spokesman for Border Communities Against Brexit, said it was “not a day of celebration or delight as its seems to be in Westminster for many”.

People along the Border were still concerned that a no-deal Brexit was “certainly not off the table” given that talks on a trade deal between the EU and UK still have to begin and that the UK could still leave EU economic rules at the end of the transition period on December 31st, he said.

“We are concerned for people who live here and the difference there will be in the rights that people will have from 50 yards that side of the Border to where we stand,” said Mr Fearon, speaking yards from the Border between counties Louth and Armagh.

“It is a sad day in this year . . . we are determined to continue to press all involved to make sure that we are allowed to mitigate as many of the issues Brexit has brought to the people,” he said.

Locals living next to the Border in Northern Ireland expressed concern for their future.

“I’m at a funeral today,” said farmer Seamus “Jazz” McDonnell, fearful of post-Brexit differences in regulations and customs between the UK and the EU where he sells sheep.

“The vision that I have is that we are going to be out of business and it is sad. I can’t see any other way out. I just can’t.”

Another farmer, Damian McGenity, also a campaigner with the Border lobby group, said that the withdrawal agreement only creates “a deal for this year”.

He dismissed the claims of British prime minister Boris Johnson that there would be no checks between the EU and UK as “utter nonsense.”

“If these trade talks go wrong, we could be looking at a no-deal at the end of the year,” he said.