Election 2020: Five constituency contests worth keeping an eye on 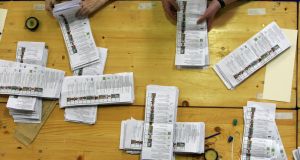 The results of phantom polls can travel along the constituency bush telegraph, suggesting that one candidate or another is in trouble. Photograph: Frank Miller

If the final days of an election campaign are when swing voters traditionally make up their minds, then they are also often the days when discipline breaks down within political parties.

Disputes and rows can flare up between running mates, sometimes leading to claims that agreed boundaries are being ignored and long standing conventions disregarded.

The results of phantom polls can also travel along the constituency bush telegraph, suggesting that one candidate or another is in trouble.

As Election 2020 enters its final week, here are some constituency contests to keep an eye on:

The outgoing TDs in this three seat constituency are Fine Gael ministers Regina Doherty and Helen McEntee as well as Fianna Fáil’s education spokesman Thomas Byrne. At the last election in 2016, Fine Gael polled a combined 35 per cent, with Fianna Fáil on 26 per cent. Sinn Féin’s Darren O’Rourke lost out to Doherty for the last seat.

Ms Doherty and Ms McEntee are known to have a keen rivalry and party figures are watching to see if any pressure on the Fine Gael vote, allied with an increase for Sinn Féin, could see whatever spirit of co-operation there is between the pair and their election teams fall away.

Minister for Housing Eoghan Murphy and Fine Gael backbencher Kate O’Connell are also known within the party to keep a close eye on each other. At the 2016 election, MR Murphy gave up a significant chunk of Dublin Bay South to help get Ms O’Connell elected on a combined 30 per cent constituency vote share for Fine Gael.

In the Fine Gael leadership contest, O’Connell – who took the side of Simon Coveney – took a swipe at the “choirboys” backing Leo Varadkar’s campaign. Mr Murphy, of course, was Mr Varadkar’s campaign manager. With Eamon Ryan expected to surf the green wave to top the poll in Dublin Bay South, Mr Murphy and Ms O’Connell may be at daggers drawn within days if Fine Gael is struggling in the polls.

Five-seat Dublin Fingal has two rivalries which could be expected to come nicely to the boil this weekend. Fine Gael won two seats here in 2011 with former health minister James Reilly and party backbencher Alan Farrell. Mr Reilly lost his seat in 2016 as Mr Farrell held on, but became a senator and ran in a Dáil byelection in Fingal last year.

Farrell took a legal case over a 2015 road accident, but was only awarded €2,500 after a judge described his injuries as “very minor”, and the issue is said to feature on the canvass. Local sources say there is now a genuine contest for the Fine Gael seat.

The last general election saw the teams of Fianna Fáil Fingal candidates Darragh O’Brien and Senator Lorraine Clifford Lee have a row in a Portmarnock housing estate and further fireworks cannot be rule out.

The Fianna Fáil Moynihans – Aindreas and Michael, who is the Fianna Fáil chief whip – are hoping to hold their seats in the three-seat bellwether constituency of Cork North West.

The other outgoing TD is Minister for Agriculture Michael Creed, who is joined on the Fine Gael ticket by John Paul O’Shea – a former Independent who won just under 5,000 first preference votes at the 2016.

Michael Moynihan views his seat as one of the most marginal in the country but the Fianna Fail whip will have to maintain local discipline ahead of polling day.

Fianna Fáil is widely tipped to take two of the four seats in Clare, with Cathal Crowe expected to join outgoing TD Timmy Dooley in the 33rd Dáil. The 2016 election saw Fine Gael take two seats - for Pat Breen and Joe Carey - on just under 26 per cent of first preferences, four per cent short of the Fianna Fáil first preference share.

The retirement of outgoing Independent TD Dr Michael Harty has freed up a seat, but a resurgent Fianna Fáil, again allied with a rising Sinn Féin vote, will make Breen and Carey nervous. Both are said to have big teams of canvassers out in Clare as they seek to drum up support.