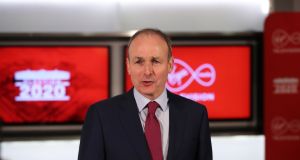 The only missing ingredients from the latest leaders’ debate were individual entrance tunes for each of the participants, just like in professional wrestling.

Despite that omission, there was just as much shouting and posturing during the Virgin Media seven-way contest as would be expected at the hammiest WWE encounter.

The tone was set early on by Ivan Yates, moderating alongside Matt Cooper, who looked across at Leo Varadkar, Micheál Martin, Mary Lou McDonald, Brendan Howlin, Eamon Ryan, Catherine Murphy of the Social Democrats and Mick Barry of the Socialist Party, and asked if they were charlatans and chancers because of the commitments in their manifestos.

Both Cooper and Yates were aggressive from the off but backed off in the second half of the 90-plus minutes show, allowing the leaders more space to debate the issues. There were some trends amid the noise, however.

It came only days after the first multi-party leaders’ debate with Claire Byrne on RTÉ but the intervening period had seen an important point in the campaign with the publication of the Sinn Féin manifesto. McDonald’s radical proposals envisage a dramatic increase in public spending funded by billions of euro in tax increases on businesses and higher earners.

Both Varadkar and Martin attacked Sinn Féin on their policies, with the Fianna Fáil leader saying McDonald will tax everyone “out of existence”. Varadkar said Sinn Féin would bring in €4 billion in new taxes and cause capital flight.

Both clearly feel the way to peg Sinn Féin’s campaign momentum so far is to highlight these policies. McDonald’s party may come to regret laying such a manifesto before the public, if it turns out to be a drag on their support.

McDonald herself was more subdued on Thursday than during the RTÉ debate, where she seemingly drew energy from the live studio audience.

She was at her strongest when criticising Martin, in particular, for his attitude to her party. “It is always the jibe, it is always the put down to the side regarding the North,” she told Martin. The standard Sinn Féin lines on Fianna Fáil and Fine Gael being the same were rolled out.

While both Martin and Varadkar ruled out Sinn Féin as a coalition partner, the Taoiseach said it was because of what their policies would do in future rather than what had been done in the past.

Varadkar, in line with the Fine Gael campaign as it enters the final week, attempted to wheel most of his answers back around to the economy, arguing: “We can’t pay for any of these things unless we have a strong economy.”

“Which party do you trust?” he asked, as he also made the case for tax cuts and putting money back in people’s pockets. Other strong points came when he admitted the abandoned commemoration of the RIC had been a mistake and argued his position that landlords are often small investors, are needed in the housing sector and should not be vilified

Martin put in his best debate performance of the campaign to date, interjecting successfully at times and playing the grown up when proceedings became loud and unruly.

“Just calm it,” he told the moderators at one point. He probably emerged the narrow winner because he acted with calm authority at times, whilst also mixing emotive argument.

“Leo, I don’t know if you get it,” he said to Varadkar. “There are thousands of people looking for social houses.”

Eamon Ryan also improved his performance from the RTÉ debate, and spoke with a passion on subjects whilst also managing to be more precise than he had been earlier in the week. At one point, Yates tried to make him feel uncomfortable on the issue of €15 billion of costs associated with his plan to retrofit houses but the Green leader explained himself well.

Howlin is a polished debate performer and can be content with how he has pushed his party’s message over both debates this week.

Catherine Murphy of the Social Democrats seemed to get lost in the early chaos and struggled to get her point across when the opportunity arose. Much like Richard Boyd Barrett on Monday, Mick Barry made the most of his appearance and the other leaders seemed content to let him have the floor.

One of the few occasions he was challenged was when Varadkar pulled him up on his general criticism of landlords.

Yet it was a messy and noisy affair overall, and the next and final debate - the head to head between Martin and Varadkar next Tuesday, shortly ahead of polling day on Saturday, February 8th - will be the key broadcast event of Election 2020.