The Irish Border signs off Twitter: ‘It feels like I won the battle and lost the war’

@BorderIrish account has over 100,000 followers, but is retiring as Brexit begins 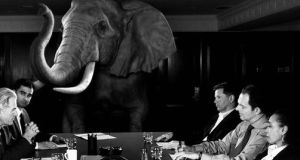 Two years ago, the Border decided the time had come to make its voice heard.

“I’m seamless and frictionless already, thanks,” it wrote on Twitter. “Bit scared of physical infrastructure. Don’t like the sea.”

The Border’s account, @BorderIrish, now has more than 100,000 followers; it has infiltrated crunch Brexit negotiations by hiding in a plant pot, become a media sensation, and even written its own book: I Am The Border, So I Am.

Throughout, it has used humour to make a serious point about Brexit, and to give voice to those who live and work along the Border’s length.

Yet it too is leaving. When the UK leaves the EU at 11pm on Friday, the Border will take its leave of social media and return, it hopes, to the quiet life – the life it had become used to until Brexit came along.

The person behind the account has carefully guarded their anonymity but their identity is known to The Irish Times, to which this parting message has been provided. – Freya McClements

This is the Irish Border’s farewell:

Three years I’ve spent, and two of them on Twitter, campaigning not to become a hard Border and it seems to have worked.

But it feels like I won the battle and the war was lost.

I started my Twitter account two years ago to raise consciousness about the Border and how it might pan out under a hard Brexit. It’s been quite a journey.

It began with the UK in denial, as if the Border question was an irritating buzzing noise in the ears of Brexit that could be swatted away like a midge on a summer’s evening.

Then there was the technological solution. It seems quaint now, the hours and column inches we spent wondering about drones and pre-clearance and wee tiny cameras on sticks on the A1.

I want to free trade. It want to let it run wild. I want it to smile with a carefree joy as it skips through the mountains and across the plains. I want it to think thoughts that are so free that they are mere expressions of instinct, hardly tangible. Or something like that

Next came the alternative arrangements. Remember them? They were like the technological solution but with more paper and a bit of added mystery. None of these were ever going to work though.

It was a beautifully constructed piece of statecraft – ingenious and delicately poised. So inevitably it was trampled on and chucked out.

Or, as people love to say, with a border in the Irish Sea. There’s only one Border in Ireland, I’ll have you know, and it’s not that one.

The Irish Sea border will be a kind of franchise operation. I’ll be contracting out to the Irish Sea border the actual work of bordering while I go on doing absolutely zilch and getting all the glory of being invisible in a post-Belfast Agreement kind of way.

The Irish Sea border is just a glorified tax return and it’ll be mainly doing its work in Belfast Harbour and, God help it, Larne.

And it will be doing the veterinary inspections, not me, because I’d be a bit queasy about that kind of thing.

This is an excellent arrangement for an elderly Border like myself, and definitely something better suited to a new border with a bit of ambition. It’s good to give the kids a chance.

So Brexit has ended up leaving me as I am (but with a minion doing my dirty work).

This is good, but in the process it has made an awful mess everywhere else.

The Irish Government got me fixed and then fell apart. Fine Gael, of course, love nothing better than a good Anglo-Irish crisis to get their teeth into, but they got a bit distracted by Brexit and forgot they had a country to run, houses to build, and sick people to look after, so they’ll be out on their arses having done well by me.

Britain, meanwhile, is completely divided in a way that any self-respecting border would envy.

Brexit is nothing if not ironic. From the beginning I worried that it would open up old divisions in Northern Ireland.

The UK suddenly having a constitutional convulsion, while forgetting that it had a finely balanced constitutional settlement to look after, was terrifying for everyone who has a memory of how we got to the Belfast Agreement and all that preceded it.

And yet here we are, with Brexit the one thing that has united the politicians now they’re back in Stormont, having to patch up the mess left by Boris Johnson.

It’s been a frightening time. It’s been an uncertain time. Things are only a little more certain now.

The UK will leave the EU, but Northern Ireland will be simultaneously in the EU and out of the EU.

My work as @BorderIrish is done.

People say that Twitter is a cesspit of the worst of human life. I have found it to be a place of humour and solidarity, of people trying to learn and understand things.

It’s been a refuge for me, a place to be heard, a way to give voice to one version of what the Border is. But now it’s over and a new stage begins.

Let’s hope the future doesn’t need another mouthy Irish Border Twitter account to be sarcastic at the expense of people who have forgotten the history of this island.