Miriam Lord: The Three Amigos. The lads. The state of them

It’s all good fun, but Shane Ross is under no illusions Dublin Rathdown seat is in danger 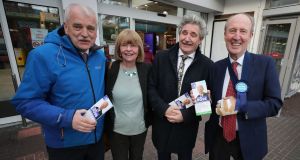 There is usually a decent amount of time between the break-up of a boy band and the first reunion tour, the timing of which has a lot to do with a need to start making money again.

Not so with Independent Alliance, barely a wet weekend out of Leinster House with an emotional nation still coming to terms with the break-up and the members are back on the road collecting votes again.

It’s a familiar scenario. The split has happened, but one of them is still gigging away and the others, out of a sense of duty and an unquenchable thirst for the limelight, consent to a short run of comeback performances.

So here they are again, limbering up for another tilt at greatness. The Three Amigos. The lads. The state of them.

Dapper John Halligan, rocking the black suede shoes and natty tweed coat. The bohemian hair a symphony in pepper and salt. He casually mentions he’s just come from Áras an Uachtaráin, where he’s been hanging out with the President.

Finian McGrath, chillin’ in the car park. Sitting in the boot of his car, under the lid, smoking a cigarette.

It’s Ross – known to fans as Winston Churchtown – who can’t leave the Dáil scene. And his boys have his back.

Thursday afternoon and they’re in the middle of their three week “For One Campaign Only” tour of Dublin Rathdown. They have a gig in Ballinteer at half three after Winston completes a press conference in the Department of Sport on the bailout of the Football Association of Ireland.

A very welcome move. That’s one way to drum up votes.

“To be honest” he says, “the timing was not of our choice. I know what people are saying but there’s a compelling reason why it should be done very urgently because of the finances – they’re perilous and the urgency comes from their condition, not from any electoral consideration. It had to be done.”

Speaking of timing, he’s late. The other two (both outgoing junior ministers) wait inside the main doors of SuperValu, until they are thrown out for canvassing.

Halligan has come up from Waterford to give the senior man his support. McGrath, formerly of Dublin Bay North, has made the more arduous trip across from the Northside. Clearly disorientated, he hasn’t brought his guitar.

Ruth Buchanan, Ross’s wife, is keeping an eye on proceedings. “We have great guides for them. They’re a wonderful team of girls. We’ll make sure they don’t get lost.”

As they are still office holders but not standing for election, the pair are being drafted in to replace senior ministers – who are busy defending their seats – at formal events.

“I was there on behalf of Simon Coveney today. It was excellent. Michael D was meeting 61 ambassadors. I had a great chat with the Palestinian ambassador.”

“They’re great gigs” says Finian, who has subbed on a couple of occasions in the past two weeks. “I have a few more coming up.”

The two men will remain in office until at least February 20th, and maybe much longer, depending on the election outcome and subsequent horse-trading.

John Halligan brought volunteers from Waterford to join team Ross. He intends to step up the effort next week. “I’m going to stay with Shane for two nights and canvass for two nights. I’ve good time for him and I hope he gets elected. He helped me in the constituency when I asked him.”

He tells Ruth. “I’m up with you next Wednesday, Thursday.”

When he finally arrives, the outgoing Minister for Transport and Sport says he will do the cooking. Ruth laughs. Her husband, one arm out of action, is explaining how he sustained his injury to yet another curious potential number one vote.

The two junior ministers hand out leaflets to shoppers in SuperValu’s porch. It’s mid afternoon and not very busy. Halligan writes down a constituent’s concerns on the back of a canvassing card. She wants help in setting up a residents’ association.

There’s a triumphant cry from McGrath, who has been chatting to an elderly woman. “Four number ones in this house!”

He may not be moping votes but he’s certainly mopping up sympathy. Some people are saying he hurt himself on purpose. “A bit extreme, I would have thought” he says.

Then again, every cloud and all that: “They all want to know what happened. It’s a good recognition factor. It’s a big plus.”

The three amigos have been out and about doing the housing estates. Having a good time. They love having group photographs taken. On three occasions, they miss sets of twins being wheeled past them into the shopping centre. The Irish Times photographer is heartbroken.

Eventually, after the candidate have filled a very concerned young woman in on the extent of his injuries, somebody asks if the group might pose for a photo with her gorgeously gurgling and photogenic twin baby girls.

Finian tells us John is writing a book. He doesn’t deny it.

A man hails Ross as “that communist there! You’re the ones from the Communist party.” They know each other. “Ruth, come here. This man escaped from the Maze [PRISON]. I have his book at home.”

“It was Crumlin Road” laughs Donal Donnelly. His wife Caitriona tells us he escaped “60 years ago last year. He was only 21 at the time. And he was the only prisoner they never caught.”

Finian pointed over at John. “The Marxist wing is over here!”

It’s all good fun, but Shane Ross knows his seat is in danger. The word in the constituency is that sitting Green party TD Catherine Martin will top the poll with more than a quota.

“Catherine’s number twos are key” said Finian sagely, utterly a sentence that nobody expected to hear during the Dublin Rathdown campaign.

It might explain why Winston has a very visible green “recycled” printed inside a recycle logo on all of his posters. It might win a few of those valuable green preferences.

Halligan and McGrath say it will be a hard slog for their colleague. “I’ve been out a few times. He’s in a tough battle, you know. He’s fighting for that last seat. There’s no point in saying otherwise – it’s a very difficult one.

“That’s the vibe I’m getting. But he knows that. He knows he’s in a dog fight but I still think he’ll survive” says Finian.

Ross is under no illusions. He knows he is fighting for the last seat in a three seater, with the first two going to Green and Fine Gael. “I think the bookies have me getting in just marginally. I don’t know, it’s very difficult to tell.”

As for the end of the Independent Alliance – he is sorry his two amigos have retired. But he fully expects a reformed line-up in the next Dáil. There will be another group of independents who will want a platform.

But for now, the Three Amigos are enjoying their encore.