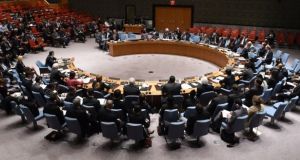 It is the fourth time Ireland has held one of the 10 rotating seats on the influential UN Security Council.

Ireland will be aim to be “a catalyst for more consensus building” as the State takes a seat on the UN Security Council, Minister for Foreign Affairs Simon Coveney has said.

Speaking ahead of the start of Ireland’s two-year term on the 15-nation council on Friday, Mr Coveney said Ireland would hope to “build alliances to get practical things done” and attempt to limit the use of the veto on the council that has been “so detrimental” to the credibility of the international body.

“We want to see Ireland playing a constructive, impactful role, but the only way you get that done in international politics and around a table as significant as the UN Security Council is to try to build consensus, relationships and trust, and ensure Ireland becomes a credible voice,” he said.

“This means saying no at times and standing up for ourselves and our own principles, even when it is a friend coming calling.”

This will be the fourth time the country has held one of the 10 rotating seats on the influential body, the last time being in 2001 and 2002 in the wake of the 9/11 terror attacks on the US.

Explainer: Is winning a seat on UN Security Council a big deal for Ireland?

Ireland was last year elected alongside India, Kenya, Mexico and Norway as non-permanent members in the powerful inner sanctum of the United Nations.

Geraldine Byrne Nason, Ireland’s permanent representative at the UN, will represent the State on the council after leading the successful two-year campaign for a seat that saw Ireland beat a strong competitor in Canada in a group with Norway.

Ireland will join five others Niger, Tunisia, Vietnam, Estonia and the Caribbean island nation Saint Vincent and the Grenadines, all currently in the middle of their non-permanent terms.

Five permanent members - China, France, Russia, the UK and the US - hold the remaining seats and have the power to veto any resolutions made by the council.

Russia and China increased their use of the veto considerably since 2011, mostly in relation to the conflict in Syria. The US under President Donald Trump has vetoed a number of security council resolutions that have been critical of Israel or US policy towards Israel.

Mr Coveney said he hopes Ireland can “explore and develop middle ground positions” among the divergent views of the five permanent members that often stymie consensus, result in the veto being used “sometimes with tragic consequences” and prevent the council “being more effective.”

He anticipates “a very different approach” on the council when Joe Biden becomes US president on January 20th and embraces a return to multilateralism, abandoning “the bilateral and transactional-focused diplomacy” that Mr Trump followed during his time in the White House.

He expects to see “a very significant step-change” in policy from the US on climate change and on the 2015 agreement to prevent Iran develop a nuclear weapon that Barack Obama’s administration helped broker but which Trump rejected.

“That is not to say we will agree on everything,” said the minister of the US.

Mr Coveney said that the Government has signalled a willingness to take on the role of “facilitator” in a bid to resurrect the Iran deal - “arguably the most politically contentious issue on the council”. The deal was agreed between Iran, the five permanent members and Germany.

“We want to be part of consensus building in the hope that it may be possible to get an agreement that involves the US and indeed acceptance from Iran as well in terms of getting that agreement back as the basis for preventing nuclear weapons being developed in Iran,” he said.

“It is not easy but I think it is a very interesting area for Ireland to give leadership on.”

Mr Coveney expects Ireland to become co-chair of the women, peace and security committee within the council, to take an important role in policy on Somalia and the Horn of Africa, and to become involved in providing humanitarian assistance to people displaced by the war in Syria.

“We are likely to be a pen-holder in that space which means essentially trying to coordinate an international response from and through the council. That’s a pretty complex challenge,” he said.

Mr Coveney said that he hoped Ireland would bring to the membership of the council “an independence of mind” based on “adherence to international law, ensuring multilateralism works and ensuring small states as well as big states are protected by those systems.”