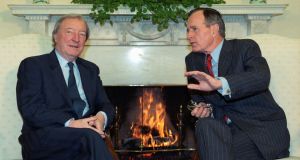 US president George Bush senior agreed to provide advice and to fly experts over to Ireland to help establish the Environmental Protection Agency (EPA).

In a meeting with taoiseach Charles Haughey in February 1990, Bush said he would make the resources of the US EPA available in establishing a new agency for Ireland.

Mr Haughey visited the White House in his role as president of the European Community, where he said he wanted Ireland’s six-month term to be seen as a “green presidency”.

While there Bush also defended his decision to invite South African president FW de Klerk, along with recently-released ANC leader Nelson Mandela, to the White House on the basis “a reasonable white man and reasonable black man gave an opportunity for a solution”.

During his three-day trip to Washington, Haughey met William Reilly, director of the US EPA. At the bilateral meeting Bush suggested that Reilly and two eminent former directors of the agency, Russel Train and Bill Hucklehaus, travel to Ireland to give advice.

In a follow-up letter to the US ambassador in Dublin the following month, a senior government official asked would it be possible for either Train or Hucklehaus to make an informal visit to Ireland. The letter also stated that Reilly was being written to directly. It proposed that officials of the US EPA be seconded on a short-term basis to give advice to the fledgling Irish agency. Legislation was in place for the Irish EPA, which came into being within a year.

The records from the Department of the Taoiseach are being published under the 30-year rule for release of State papers. There is no record of an actual visit from any of three senior US officials.

In his meeting with Bush in February, Haughey got agreement that the US and the Council of Europe would meet formally twice each year, which represented a big breakthrough for the European Community in terms of its status.

The meeting between the two leaders, also attended by secretary of state James Baker, mainly focused on German unification and its implications for Europe.

In a non-verbatim note of the meeting by a senior official (archives record 20/3/427), Bush asked Haughey for his views on the implications of German reunification, and if West Germany had enough resources to meet the costs.

Haughey said no one knew for certain. “The general expectation is that Germany will be able to take the bulk of the costs without detriment to the structural funds which are essential to enable the less-developed regions of the EC compete in the single market,” he said.

He acknowledged that Germany’s dominance in the EC would be strengthened, but that chancellor Kohl had reassured other states of Germany’s commitment to the community.

Asked if the European Community was open to new members, including Austria, Haughey replied the thinking was it was not feasible or desirable at that moment in time. “A community of 12 is hard enough to handle.”

In a discussion on the environment Bush said it could not just be simply asking Brazil not to take away its rain forests.

“They cannot be told how to manage their affairs. They can point to the way we manage our factories and, for example, burn coal,” he told Haughey.

“The US has a great concern about a chemical plant which was capable of producing chemical weapons.”

He said some countries such as Italy believed Gadafy had reformed, but then said he would disclose information to Haughey about that “so that all would be on the same wavelength”.

Haughey said Gadafy was no longer helping the IRA. “We asked for that. Ireland can send messages as we have trade relations.”

On South Africa, where de Klerk was introducing some reforms and had approved the release of Mandela, Haughey said the European Community considered it too soon to remove sanctions.

Bush said he had invited Mandela and de Klerk to visit him. “There was criticism of the latter invitation and there will be protests. Mandela will get a big welcome. A reasonable white man and reasonable black man gave an opportunity for a solution,” he said.

The taoiseach said that inviting both was the correct approach.