Memo from 1997 records meeting between Michael Ancram and David Trimble 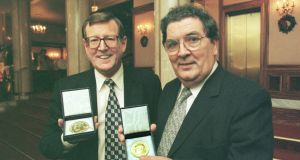 In 1998, David Trimble and John Hume were co-awarded the Nobel Peace Prize for their efforts to secure peace in the North. Photograph: Matt Kavanagh

The memo from January 1997 records a meeting between then minister of state for Northern Ireland Michael Ancram and Ulster Unionist leader Trimble.

During a discussion about the possibility of the IRA giving up its weapons to allow Sinn Féin into cross-party peace talks, Trimble said that he was “satisfied that [then minister for foreign affairs Dick] Spring and John Hume were determined that decommissioning would never happen”.

According to the memo, Trimble called both Hume and Spring “duplicitous” on the issue.

On “mention of the Irish, Trimble said that he distrusted Spring and Hume as they both wanted Sinn Féin in [peace talks] and didn’t want decommissioning to happen”, the memo records.

Both Hume and Trimble were co-awarded the Nobel Peace Prize during a ceremony in Oslo the following year for their efforts to secure peace in the North.

Later in the meeting, Trimble “repeated again his line about the Irish and Hume, namely that it was their first priority to get Sinn Féin into talks”.

Trimble threatened that he would walk out of talks if there was “something dodgy” going on without his knowledge.

At the time, Gerry Adams and John Major were secretly trading questions and answers with each other, through Hume, in an attempt to get the IRA to restore its ceasefire, which had broken down three years previously, and Sinn Féin at the talks table.

Trimble told Ancram he wanted a “copper fastened guarantee” on the IRA giving up its arsenal of weaponry as he could not survive sitting down with Sinn Féin “without something happening on decommissioning”.