Members of Young Fine Gael have their say on leadership contest 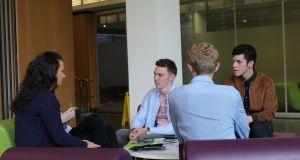 While the quiet air of summer holidays has hit UCD’s Belfield campus, there was an atmosphere of anticipation among some of the scattering of students who remained.

Many of these members of UCD Young Fine Gael should have gone home by now but they stayed in Dublin for the start of the party’s leadership hustings last week.

For many, this is the first leadership contest they have seen as party members, and the opportunity to vote for the leader is not lost on them. They are excited about a a coming “generational shift” with either Simon Coveney or Leo Varadkar and see it as a time for change after Enda Kenny led the country through hard times as Taoiseach.

It is about the social recovery after the economic recovery, says Mourad Mejdi, Leinster regional council chair of the party’s youth wing.

“People are just barely getting by. They’re doing nothing wrong, not out of their own fault, they’re working every hour God sends but it’s just their wages are stagnant,” he says. Members see the social recovery as a chance to invest in health and education infrastructure to extend the recovery across the population.

Conor Glynn, a member of the UCD branch, says “The social recovery includes a lot of things . . . But you can’t do any of that if you don’t have money, unfortunately. We’d love to do everything . . . once we have kind of got on the road to somewhere that we can invest more in health, things like free GP care and childcare for people.”

The youth wing of the party is strong in universities. Not surprisingly, funding of higher-level education, student accommodation and the prospective jobs market are key issues for them.

Another member, Jane Leydon, says “The new leader should exploit the fact that the country is now in a much better economic position and focus on the issues that are prevalent, like housing.”

“Accommodation is a huge one,” says Conor Glynn. “For most college students it’s so expensive, it’s so difficult to get a house or digs.”

Another member, Conor McGowan, says Fine Gael sees education as the best route out of poverty as social mobility is encouraged, along with hard work.

There is no clear preference for either candidate across the younger members whose opinions were canvassed. They are split in their support for Coveney and Varadkar, and a large number remain undecided. Despite this, many still see the contest as largely a done deal, with the parliamentary party holding the largest share of the votes.

To these members, however, long-term policy is key. Coveney’s action plan as Minister for Housing is praised as a forward-thinking initiative that puts the country ahead of the party.

“In 20 years’ time I want to see a country where I came out of college, I was able to live here, set up and start a family,” says McGowan, who is chair of the UCD branch.

How then do the two candidates stack up? McGowan says “both candidates have the potential to deliver”.

While Varadkar is often seen as the more right-wing of the two, his promise to help the “people who get up early in the morning” is defended. “There’s people accusing him of class warfare and I think that’s jumping the gun a little . . . We have laws and we have rules and I don’t think it’s attacking anyone just to ensure that they are enforced,” says Mejdi.

Overall, what the youth of the party want is a leader who can “broaden the base of Fine Gael”. Ultimately they are looking for a leader who listens to young people and invests in a social recovery for the long-term.