Frances Fitzgerald indicates she will run for FG leadership 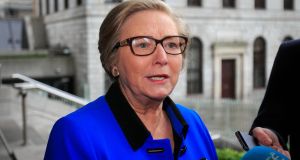 Tánaiste and Minister for Justice Frances Fitzgerald said it would be healthy for Fine Gael to have “good debate” in the upcoming leadership contest. Photograph: Gareth Chaney Collins 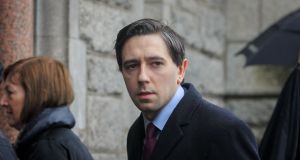 Minister for Health Simon Harris who has ruled himself out of the Fine Gael leadership race.

Tánaiste Frances Fitzgerald has given a strong indication that she will contest the Fine Gael leadership election when Taoiseach Enda Kenny stands aside.

Ms Fitzgerald’s political protege, Minister for Health Simon Harris, ruled himself out earlier on Monday but said he would support and campaign for one candidate.

At the moment, it is believed that Mr Harris will support Minister for Housing Simon Coveney.

When asked about her own intentions, Ms Fitzgerald said: “I’m considering it very seriously.” It is widely assumed in Fine Gael that the contest will come down to a fight between Mr Coveney and Leo Varadkar, the Minister for Social Protection, but Ms Fitzgerald said it would be healthy for Fine Gael to have “good debate”.

“The last time there was a Fine Gael election for leader there were four candidates, I think it is very healthy for the party to have a good debate, leading up to the formal nomination of a new leader and I am certainly seriously considering it,” she said.

“But right now, the Taoiseach is in place and I await further developments before I say anything else. It is an important time for the party. The party has a very serious role to play in Irish society and we deserve to have a serious debate leading to the election of a new leader.”

When asked if she would have the support of the required eight members of the parliamentary party to allow her enter the race proper, she said: “I’ll deal with that when the time comes.”

Speaking to RTÉ Radio this morning Mr Harris explained that his lack of experience compared with potential rivals, as well as the need for continuity atop the country’s health services were the main reasons behind his decision not to run.

The Wicklow TD said that while a tilt at the leadership competition was “worth giving consideration to”, it would be “inappropriate” to vacate the position of Minister for Health given the ongoing difficulties facing both patients and staff.

“I’ve made my decision, I’m very satisfied with that, and I’m sure many other people are considering their options in the coming days and weeks,” he said.

When pressed on his preferred candidate for party leader he refused to openly pledge support to any one of his Cabinet colleagues at this early stage.

Mr Harris had been regarded as a possible contender for the position alongside Mr Coveney, Mr Varadkar and Ms Fitzgerald.

Mr Kenny last month announced his intention to set out his future plans after the annual St Patrick’s Day visit to the White House amid mounting pressure for him to unveil a roadmap for his resignation.

Mr Harris did, however, speak positively of Ms Fitzgerald and her leadership credentials when asked about a leaked private message in which Minister for Foreign Affairs Charlie Flanagan claimed the Minister for Justice was “encouraging” Mr Harris to contest the leadership race.

“I’m pleased that Charlie Flanagan apologised to me and indeed apologised publicly in relation to that.

“Frances Fitzgerald is a very good friend of mine, she is a mentor of mine,” he remarked.

“I’m proud to call her a friend and a colleague, she has an awful lot to offer to the Fine Gael party and to the country, as do many people.”

In the same message, Mr Flanagan also indicated that the Minister for Health “wants out” of the role, but this was refuted by Mr Harris who told the Seán O’Rourke Show that he would be “delighted” to continue in his current portfolio.

First elected to the Dáil in 2011, the 30-year-old served as a junior minister with responsibility for the Office of Public Works during the previous administration before being promoted to Minister for Health in May of last year.

He was seen as an outside bet to become leader of Fine Gael, as illustrated by a support rating of just 3 per cent in a recent Irish Times/Ipsos MRBI poll of public attitudes, significantly trailing frontrunners Mr Coveney at 28 per cent and Mr Varadkar at 30 per cent.

When the preferences of Fine Gael voters were calculated in isolation from the overall results, Mr Coveney had a support rating of 49 per cent ahead of Mr Varadkar at 44 per cent.

It has been widely anticipated that the Taoiseach will step down as early as Easter following his announcement last month.