Simon Coveney is the choice of almost half of Fine Gael voters in a head-to-head contest against Leo Varadkar, according to the latest Irish Times/Ipsos MRBI opinion poll. 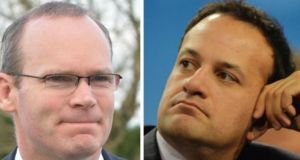 Simon Coveney is stronger among older voters, more rural voters, farmers, men and voters in Munster and Connacht-Ulster, while Leo Varadkar’s strength is in Dublin. Photographs: The Irish Times

Simon Coveney is the choice of almost half of Fine Gael voters to succeed Enda Kenny in a head-to-head contest against Leo Varadkar, according to the latest Irish Times/Ipsos MRBI opinion poll.

Asked to choose between the two widely expected candidates to lead the party after Mr Kenny steps down, Mr Coveney is preferred as the next leader by 49 per cent of Fine Gael voters, while 44 per cent say they would choose Mr Varadkar.

Seven per cent of respondents say they don’t know.

The results give Mr Coveney a small lead over his presumed rival in the leadership contest, which is expected in the coming weeks.

Taoiseach Enda Kenny has said he will make an announcement about his future when he returns from the St Patrick’s Day visit to Washington, universally anticipated in the party to herald the first leadership election in the party since 2002.

Just over a fifth of all voters (22 per cent) said they didn’t know.

Among Fine Gael voters who were offered the long list of potential candidates, Mr Varadkar enjoys a small lead – 42 per cent against Mr Coveney’s 38 per cent.

However, when all voters are asked to choose between the two men for the Fine Gael leadership, Mr Coveney has a slight advantage, 40 per cent to 38 per cent.

It is when only Fine Gael voters are considered that Mr Coveney’s lead stretches to five points, 49 per cent to 44 per cent.

Many TDs say privately that they will vote for whoever gives them the best chance of retaining their seat, but given that the councillors and members have a say in picking the next leader too, the views of Fine Gael voters will have a major influence.

Mr Varadkar’s strength is in Dublin, the rest of Leinster, urban voters, younger voters, women and the wealthiest AB group, where half of all voters back him.

Asked for their views on the new politics in place since the formation of the minority Government last year, 30 per cent of voters said it represented “change for the better”.

Almost the same amount (27 per cent) said that it was a “change for the worse”, while the greatest number – 35 per cent – said that it made no difference.

The exact question voters were asked was as follows: “With the Government requiring the support of Fianna Fáil, it is no longer possible to force legislation through the Dáil. Instead there has to be debate and agreement. But it also means fewer Bills are passed because there has to be debate and agreement. Is this new kind of politics a change for the better or the worse, or does it not make any difference in your opinion?”

The general shrug of voters on the question of new politics is replicated more or less equally across the various regions and demographics. Among the supporters of the different parties, Fine Gael supporters are more likely to believe that it represents a change for the better, with 37 per cent of them agreeing.

Supporters of Fianna Fáil conform almost exactly to the national averages. Even Sinn Féin and Independent voters do not deviate much from the positions held by the public at large.

However, the appetite for further change in Irish politics among voters remains intense. Just 5 per cent of respondents were of the view that “no more change is needed, works okay as it is”.

It is weakest in Dublin (63 per cent) and strongest in the rest of Leinster (71 per cent).

Among supporters of the different parties, Fine Gael voters (55 per cent) are least likely to believe a lot more change is needed, while three-quarters of Independents/other voters (75 per cent) and a similar proportion of Sinn Féin voters agree.