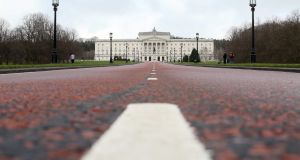 Any Unionist leader will now have to be prepared to answer the question, “If Nationalists win more seats in the next Assembly, are you prepared to accept the position of Deputy First Minister to a Sinn Féin First Minister?” It is no longer a hypothetical possibility. Photograph: Paul Faith/AFP/Getty Images

The first election to a devolved legislature in Northern Ireland took place on 24 May 1921. A record-breaking turnout delivered 40 Unionist seats in the Northern Ireland’s new House of Commons, with Sinn Féin in second place. At a time of political uncertainty, when the future status (or even location) of the Border was not yet established, the election was a crucial moment in the construction of Northern Ireland’s political infrastructure for the next half-century and more.

The March 2017 election to the Northern Ireland Assembly also elected 40 Unionists, with a greatly increased turnout, and Sinn Féin again (narrowly) in second place. It may prove to be as significant as 1921. 40 seats out of 52, almost a century ago, was enough to establish single-party government and entrench Unionist dominance. 40 seats out of 90, however, puts Unionism in a minority at Stormont for the first time ever - only just ahead of the combined 39 seats held by Sinn Féin and the SDLP.

It was a terrible election for Unionists. Under the new rules, eighteen Stormont seats had been abolished, reducing the chamber from 108 to 90, five rather than six for each of the parliamentary constituencies. Of those eighteen seats, no less than sixteen were lost by Unionists (the other two were held by Sinn Féin and the People Before Profit Alliance). This was not a result of any quirk in the electoral rules or boundaries; previous election results led most observers to expect that the inevitable pain from the reduction in numbers would be evenly shared by all sides. But that assumed that all sides’ vote share would stay the same, and it did not.

Unionists now have only one MLA out of the five representing each of South Belfast, South Down, Newry and Armagh, Mid Ulster and West Tyrone - all seats that actually elected Unionist MPs to Westminster in the not very distant past. The Ulster Unionist Party, which won all 40 of those Unionist seats in 1921, and was the largest party as recently as 2001, won only ten seats this year. The DUP lost ten seats of the 38 they had won in last year’s election. Northern Ireland’s political map has completely changed.

Turnout increased by almost 10 per cent over Northern Ireland as a whole, compared to the 2016 election. The biggest increases were precisely where Unionists suffered unexpected losses - Mid Ulster, South Down, East Londonderry. Nationalist vote share was up almost 4 per cent, Unionist vote share down by about 2 per cent (depending on how you count smaller groups). The non-sectarian Alliance Party increased its support by over 2 per cent, and they and the Green Party held all of their seats, despite the reduction in overall numbers. It’s pretty clear that non-Unionist voters came out in unprecedented numbers.

A remarkable feature of the election is that voters themselves seem more inclined to cross the divide. The SDLP’s vote share decreased yet again, giving them their worst result in history. But they managed to come out with no net losses. In several cases, seats that had appeared beyond their grasp in the early stages of counting fell into place thanks to transfers from the UUP - not just failure to transfer within Unionism, but an active choice by a crucial minority of moderate voters to try and block the extreme parties.

To be specific: UUP transfers were crucial for the SDLP seats in Lagan Valley and East Londonderry, and the SDLP returned the favour for the UUP in Fermanagh and South Tyrone. UUP leader Mike Nesbitt resigned on the evening of the count, regretting that he had not changed politics sufficiently, but his call for UUP voters to consider transferring to the SDLP ahead of the DUP may have been more effective than he gave himself credit for.

The Nationalist parties combined are still far from 50 per cent of the vote share in Northern Ireland, and the potential level of support for a United Ireland in a referendum is probably less than that for the Nationalist parties. But the imminent prospect of Brexit is causing a shift in attitudes. Everyone in Northern Ireland has become used to a more comfortable lifestyle, and the Border had almost withered away as an issue of daily significance. That is now about to change; if the UK is to disengage from its side of the integrated EU economy, it is Northern Ireland that will feel the effects first.

Sinn Féin were able to use the issue very effectively in their campaign to erode support for the pro-Brexit People Before Profit Alliance, and capture one of their two seats. The Unionist parties were not able to address this crucial concern of their electorate convincingly. This along with the shorter-term issue of competent administration (as symbolized by the RHI scandal) must have played a part in the drop in support for Unionist parties.

Does this mean a new era for Northern Ireland politics? The answer will largely depend on the lessons drawn from this debacle by Unionist leaders, whether they decide to secure their long-term position by engaging Nationalists and others, or their short-term prospects by toughening their rhetoric. The effect of the reduction in seat numbers would anyway have been to increase militancy on both sides, but the stridency of the DUP campaign was an unsuccessful shift back to the party’s rhetoric of former times - when it was still the minority force within Unionism.

But we are certainly in new territory - a greener electoral map, and a less certain future outside the EU. Any Unionist leader will now have to be prepared to answer the question, “If Nationalists win more seats in the next Assembly, are you prepared to accept the position of Deputy First Minister to a Sinn Féin First Minister?” It is no longer a hypothetical possibility.

Nicholas Whyte is a visiting professor in the faculty of social science, Ulster University, and a senior director in the Brussels office of APCO Worldwide