Higgins wins more than 50% of votes across almost all regions 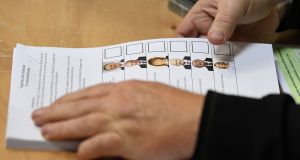 President Michael D Higgins won a straight majority of votes – more than 50 per cent – in every age group, in almost every region of the country, among women and men and among both urban and rural voters, the Irish Times/Ipsos MRBI exit poll suggests.

The strongest vote for Mr Higgins is projected to be in Dublin, where he won 66 per cent of the vote, but nowhere did any of his challengers come remotely near the sitting president. The weakest support for him was in his former political base in Connacht-Ulster, though the President still was still comfortably ahead (49 per cent ) there, the poll finds.

He was more popular among female voters (59 per cent) than men (52 per cent) and weakest among older voters (54 per cent). He won strong majorities among younger voters, winning 61 per cent of 18-24-year-olds and 59 per cent of 25-34-year-olds. Urban voters backed his re-election (60 per cent) more enthusiastically than rural voters (48 per cent), according to the exit poll.

The poll was conducted among more than 4,000 respondents yesterday at 160 polling stations throughout the country, and has an estimated margin of error of +/-1.5 per cent.

Independent Peter Casey is predicted to come second on 21 per cent, comfortably ahead of all remaining candidates, but still a distance behind Mr Higgins.

He was more popular among males, among whom he achieved 25 per cent, than females (18 per cent). Regionally, his strongest support came in Connacht-Ulster and Munster (25 per cent). He polled 13 per cent of first preferences in Dublin and 22 per cent in the rest of Leinster. Overall, he achieved 27 per cent among rural voters, compared with 18 per cent in urban areas.

Sinn Féin’s Liadh Ní Riada failed to make a breakthrough for the party, coming in on what will be seen as a disappointing 8 per cent of first-preference votes. The Munster MEP was strongest in Connacht-Ulster (10 per cent), followed by 8 per cent each in Dublin and the rest of Leinster and 8 per cent in Munster. She was more popular among men (9 per cent) than women (8 per cent) and among the second-youngest age cohort, polling 10 per cent among 25-34-year-olds.

Seán Gallagher – who came second in the 2011 presidential election – is projected to come fourth this time out with 7 per cent of first-preference votes. Mr Gallagher achieved his highest votes in the over-65 age bracket (10 per cent), as well as in Connacht-Ulster (10 per cent). He was more popular among men (8 per cent) than women (7 per cent).