‘Until Peter Casey did his Donald Trump, I wasn’t so interested, but I couldn’t rest after that’ – Annie McDonagh 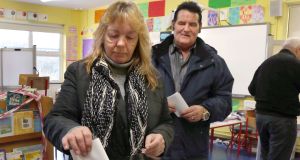 Annie and Tommy McDonagh, members of the Travelling community from Galway’s east side, cast their votes. Photograph: Joe O’Shaughnessy

Annie McDonagh could not wait to cast her vote as the bright sun banished drizzle over Galway city on Friday morning.

The mother-of-nine – and grandmother of 23 – from Ballinfoile was on babysitting duty. Beforehand, she nipped up with her husband, Tommy, to her polling station at Tirellan National School.

“Until Peter Casey did his Donald Trump, I wasn’t so interested, but I couldn’t rest after that,” Mrs McDonagh said. “There might be a low turnout, but I hope it is higher among Travellers.”

She still remembers the “feel of pitchfork steel” in the middle of the night when she and her parents were forced to move from campsites in the county.

Her mother lived with a constant threat of her children being taken from her.

“That was what people said about us on the television at the time . . . we still only make the bad news, we all get tarred with the same brush.

“My father worked for farmers, I picked spuds, and there were places where we were welcome and plenty where we were not,” Mrs McDonagh said.

She was determined that her children would have the education she missed out on, though she has fluent Traveller “cant”, and has lived in local authority housing for over 40 years.

“There are no saints on either side, but we have to talk to each other, not get set against each other,” Mrs McDonagh said. “What would I do if I met Peter Casey? I’d ignore him, only because I don’t what to bring myself down to his level. Most of my family work, and three of my children married into settled families.”

Mr Casey’s negative comments during the presidential campaign had “ignited the Travelling community”, her friend Anne Ward from Galway’s west side said.

She is a neighbour of President Michael D Higgins, living in an estate built to replace the Rahoon flats down the hill from his Circular Road home.

“Michael D was often in having tea with many of us, and so was his wife, Sabina,” Ms Ward said. “He knows about our high suicide rate – 11 times that of the settled community, particularly among young men – and he has been to our funerals and to our cultural events.”

As a councillor and a Labour Party TD for Galway West, Mr Higgins had worked to counter the negative image which Galway earned half a century ago when violent exchanges over attempts to accommodate Travellers defined the term “Rahoonery”.

“The Galway Traveller Movement asked people to vote, but didn’t single out any candidate,” its deputy co-ordinator, Bridget Kelly, said. Mr Higgins knew her grandparents, and helped to house her parents when one of her sisters was born with a disability.

“We know that four of the other five candidates did speak up for us,” Ms Kelly said. “We just want a president who will represent everyone fairly and challenge all racism and discrimination.”

All three women were determined to cast ballots, but said it was hard to motivate their children after the tone of debate over the past fortnight.

“Maybe Mr Casey doesn’t know what it is like to hide who you really are,” a young Traveller man from the east side who preferred not to give his name said. He is in continuing education, having left school early to get his first job at the age of 15.

“Our vote doesn’t make any difference in general elections, but it will when we have local elections next year. It’s so sad to think that we are the only community in Ireland that has to pretend we are someone else,” he said.

“We have had an Olympic boxer, Francie Barrett, from this city, and people forget that,” Mrs McDonagh said. “We took a bus up to the Dáil when taoiseach Enda Kenny announced our ethnicity and we were in the gallery and all so proud. To think that was only March of last year.”