Speaking in Brussels, Tánaiste Simon Coveney has reiterated that "the withdrawal agreement is not up for renegotiation." Video: European Council 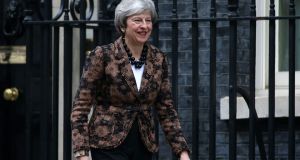 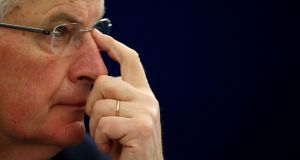 Mr Barnier also appeared to rule out the prospect of the UK striking a bilateral agreement with Ireland to break the deadlock over the deal.

Theresa May gave a statement on Brexit to parliament on Monday in which the prime minister insisted she was not seeking to rewrite the Belfast Agreement. She said attempts to forge a consensus with the Labour Party have thus far failed and that she was focusing on securing concessions from the EU in order to win over 118 rebels in her own party and the DUP, which props up her minority government.

Mr Barnier has been consistent in his message since the withdrawal agreement suffered a crushing defeat last week in the House of Commons that the EU would consider a potential British request for closer post-Brexit ties but will not renegotiate the deal.

“The withdrawal agreement with all its dimensions, including the backstop, is the best deal possible,” he told RTÉ after a 45-minute meeting with Minister for Foreign Affairs Simon Coveney in Brussels.

The backstop means that in the absence of another solution for the Border, Northern Ireland would effectively remain within the EU customs union. It is designed to avoid the return of a hard border in Ireland but has become the biggest obstacle to securing a withdrawal agreement between the UK and the EU.

“As I see, following carefully the political debate in London, this debate is much more now on the future relationship. As I said last week at the EU parliament, if the UK want to be more ambitious, we are ready to be,” Mr Barnier said.

“It is now for the UK leaders to build a stable and positive majority for a deal. We are waiting for the next steps from the UK government but we are ready to work again on the political declaration.”

Mr Coveney ruled out the renegotiation of the backstop and the withdrawal agreement and the imposition of a time-limit on the backstop.

In what has been seen as a departure from the unity of the EU27 on the backstop, Poland’s foreign minister Jacek Czaputowicz suggested the deadlock could be broken by setting a five-year time limit on the measure.

He told Polish newspaper Rzeczpospolita: “If Ireland asked the EU to amend the agreement with the British on the backstop so that it would apply temporarily - let’s say five years - the matter would be solved.

“It would obviously be less favourable for Ireland than an indefinite backstop, but much more advantageous than no-deal Brexit.”

Mr Czaputowicz said that London and Dublin were “playing chicken” over the border and risked a “head-on collision” in which Ireland stood to “lose the most”.

He said he had discussed the issue with Mr Coveney and his British counterpart Jeremy Hunt.

“I think it would be one of the solutions so that’s (an) idea to be discussed, I think within the European Union. I have the impression it might unblock the negotiations,” Mr Czaputowicz told the BBC.

Germany’s foreign minister Heiko Maas played down the Polish minister’s initiative, telling reporters: “I am completely with my Irish colleague. He has already said what he thinks of it, which is nothing.”

Mr Coveney insisted on the “willingness of the EU to be flexible in the context of the future relationship deal. If the UK wants to change its red lines or approach I think they would get a generous approach.”

He said Mr Barnier had confirmed that the “EU continues to approach Brexit as one and that the EU position is the Irish position and vice versa”. Mr Coveney said the EU remains firmly supportive of the withdrawal agreement, including the “guarantees and fallback mechanisms to ensure that there will be no physical infrastructure between the two jurisdictions on the island of Ireland”.

Downing Street on Monday morning ruled out seeking changes to the Belfast Agreement in an attempt to overcome the impasse over the backstop.

Mrs May’s official spokesman also dismissed a report – in The Daily Telegraph - that she was considering a proposal to replace the backstop with a commitment to avoid a hard border written into the agreement.

“The PM has made clear on multiple occasions that we are committed to upholding the Good Friday Agreement in all its parts and still agreeing a solution that avoids a hard border between Northern Ireland and Ireland,” he said.

The spokesman also dismissed a report that the prime minister wanted to replace the backstop with a bilateral agreement between Dublin and London. “It’s not something that we’re looking at,” he said.

He confirmed, however, that Mrs May viewed the backstop as the biggest obstacle in the way of winning parliamentary support for her Brexit withdrawal deal.

Taoiseach Leo Varadkar and Mr Coveney on Sunday rejected suggestions of a bilateral treaty with Ireland to avoid a backstop, describing it as a “non-starter”.