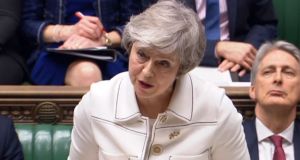 British prime minister Theresa May issues her latest statement on Brexit to MPs in the House of Commonson Monday. Photograph: PA Wire

Theresa May made the case for her Brexit deal at the despatch box of the House of Commons for two hours on Monday afternoon, asking MPs to give it a second look before they vote on Tuesday night. The air of resignation was unmistakable, however, as she acknowledged that the EU’s latest assurances about the Northern Ireland backstop would not persuade the most hardline Conservative Brexiteers and the DUP’s 10 MPs to support her deal.

The only question at Westminster last night was about the scale of the prime minister’s defeat and what options for Brexit would remain available after the vote. Limiting the defeat to double digits would amount to something close to a victory for May, maintaining her Brexit deal as the likely basis of any withdrawal plan.

A defeat by more than 150, on the other hand, would make it much harder for the prime minister to persuade the EU that a few extra concessions on the backstop would secure a majority at Westminster for her deal.

Before MPs vote on the motion on Tuesday night, they must vote on whichever amendments the Speaker selects. Two of those tabled by Monday evening have the potential to reduce the size of the government’s defeat.

One by Labour’s Hilary Benn would see MPs reject both May’s deal and a no-deal Brexit, effectively neutralising the main motion, but would probably be opposed by Brexiteers. Another from Andrew Murrison, the Conservative chair of the Northern Ireland Affairs Committee, would accept the prime minister’s deal “subject to a legal codicil being added to the Withdrawal Agreement Treaty which specifies that the backstop solution shall expire on 31 December 2022”.

May asked MPs to consider how history would judge them if they rejected her deal but former Labour leader Ed Miliband said history’s verdict on her would be determined by how she responded to a defeat on Tuesday.

“I say to her in the strongest terms that the tone and substance she strikes in the wake of that eventuality will define her legacy to this country,” he said.

“I want to urge her also, if she loses tomorrow night, to give this House an open and honest process where it can express its view, and she and the Government then become the servant of this House in the negotiations.”

A defeat on Tuesday could see the prime minister pivot away from the hardline Brexiteers and the DUP towards a cross-party consensus around a softer Brexit than she has advocated until now. Such a move could open the way for some softening on the backstop from the EU side if the emerging parliamentary vision of Brexit points to a full customs union and more regulatory alignment.