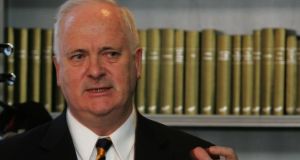 A group of senior former European politicians, including former taoiseach John Bruton and former European Commission president Jacques Delors, have written to the leaders of Europe urging “bold actions” in advance of a pre-Brexit summit this week.

The group, the European Movement International Honorary Council, a pro-European group that also includes the former European Parliament president Pat Cox, is calling for a “fully developed monetary, economic and political union” to meet the emerging challenges to Europe and the EU.

The letter, addressed to the heads of state and government of the EU, European Council president Donald Tusk and European Commission president Jean-Claude Juncker, comes ahead of the summit in Brussels.

“What is needed from you, the European Union heads of state and government and EU institutions, is courage, unity, solidarity and political leadership,” the former politicians write.

“What is needed is not just words but also deeds that reflect our collective vision for the future of the European Union. When you gather to mark the 60th anniversary of the Rome Treaty, we ask you to look forward and take the first step towards a more secure, sustainable and participative EU in the coming 60 years.”

Later this month, the British prime minister Theresa May is expected to formally trigger the article 50 process to take the UK out of the EU, and at the end of the month, European leaders will meet in Rome to mark the 60th anniversary of the Treaty of Rome, the union’s founding document.

Later today, the leaders of Germany, Italy and Spain will be hosted in Versailles by the French president François Hollande for a “mini summit” in advance of the European Council meeting on Brussels on Thursday.

Mr Hollande has said the meeting in Versailles today is “to prepare reforms for the European Union ahead of the 60th anniversary of the Treaty of Rome on 25 March”.

The pressure for reform and a new direction is increasing in the EU as the UK prepares to leave. Last week, the European Commission published a discussion paper on the future of Europe. The paper set out five options – from reducing the EU to a simple free-trade area, to pushing ahead with much more integration including a single anti-terrorism agency and more defence co-operation.

The five options are intended to promote a discussion in the remaining EU countries about what the path the union should take after the British leave.