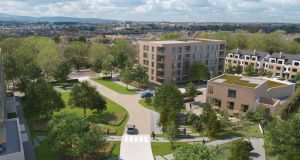 Minister of State Finian McGrath is opposing a large housing development of more than 370 apartments in his north Dublin constituency on Griffith Avenue, Marino.

Developer Cairn Homes has applied to build 377 apartments and eight houses on a three-hectare site that was previously owned by the Christian Brothers.

The development will consist of seven apartment blocks, ranging from four to eight stories in height, according to planning documents.

In a recent letter to constituents, Independent Alliance TD Finian McGrath said he had “major concerns” about the housing plans. The size of the development would be “totally out of kilter” with the site and local community, he said.

Marino is the centre of Mr McGrath’s political base in the large Dublin Bay North constituency. The letter to constituents was also signed by Dublin City Council councillor Damian O’Farrell, who is also employed as a ministerial adviser to Mr McGrath.

The developer is seeking planning permission from An Bord Pleanála under a fast-track process for large housing projects.

The letter from Mr McGrath said the size and scale of the housing plan was “an overdevelopment of this relatively small site”. It said concerns included increased traffic, its proximity to nearby schools, and “health and safety issues” for Griffith Avenue. The effect of the development on the “outlook” of the tree-lined avenue was also a concern, the letter said.

The leaflet said a public meeting to organise a community response to the planning application would be held in Marino on January 17th.

“We are mindful of the chronic housing shortage in our city at present,” the letter said. “However we believe that there has never been a more important time for adherence to proper and strategic planning,” it continued.

In a statement to The Irish Times, Mr McGrath said: “I am very much aware of the acute housing shortage and I am certainly not objecting to affordable housing development on this site.”

However, he said issues that needed to be addressed included the size of the development, and the “residential unit mix of only eight houses to 377 apartments”.

The site faces on to Griffith Avenue, and was previously owned by the Christian Brothers. The religious congregation’s European province centre is located beside the site, which also neighbours the Marino Institute of Education, and Scoil Mhuire primary school.

A planning report prepared by the developer said the internal layout of the apartment block nearest the school boundary “was modified to ensure that it will not overlook the school from living areas”. The report estimated construction would take three years from start to finish.

The land was sold by the Christian Brothers in 2014 for an undisclosed fee. A spokesman for the religious congregation confirmed proceeds from the sale were put towards contributions to a State redress scheme for historic abuse in industrial schools.