Irish forces offer guidance in efforts for peace in Mali 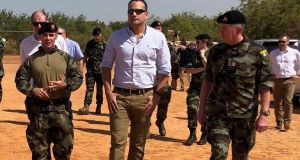 It is a ghost village, with four rows of concrete houses stretching along a long empty street. The population all left some years ago for some reasons unknown.

Now, under an unforgiving sun, it is being overtaken with brushweed and snakes.

This is Koulikoro, in the southern part of Mali, a country that has been beset by sporadic violence and Islamist extremism over the past decade. There is ongoing conflict in the north. Here it is more settled but the threat remains real, if not imminent.

A large contingent of Mali soldiers appear out of nowhere, moving in formation through the empty buildings, essentially “casing the joint” for any hostile forces or improvised booby traps. It is an impressive exercise.

And that is what it is, it is a training exercise. It forms part of urban terrain training for the armed forces of the country. Here, as in most other countries, increasing urbanisation has meant the theatre of conflict is now densely populated cities rather than open terrain.

The training is provided by the Irish Defence Forces, as part of its mandate with the European Union’s Training Mission in Mali, involving 620 personnel from 28 countries.

There are 20 Irish soldiers here, working in training and specialist roles. The trainer for this urban terrain course is Sgt John Pearse, a relation of 1916 leader Patrick Pearse. Later another highly experienced NCO, Sgt John Maloney, conducts an equally illustrative exercise with Malian soldiers to identify potential improvised explosive devices (IEDs). As in many recent conflicts, the use of IEDs in Mali has increased significantly.

In an outdoor classroom, sheltered from the sun, Lieut Catherine Smyth, Scottish-born and on her first mission, teaches humanitarian law in French to officers of the Mali army.

Witnessing all of this is Leo Varadkar, on his first visit to Africa as Taoiseach. He is clearly impressed by what he sees at Koulikoro, a large training camp about 1½ hours north from the capital Bamako. Here the Irish personnel form an integral part of an EU programme to support the local defence forces to maintain peace and stability. “It is great to see the level of sophistication and training that our Defence Forces have that we are able to impart to Malian defence forces,” said the Taoiseach.

The chief of staff of the Defence Forces, Vice-Admiral Mark Mellett, who is accompanying Mr Varadkar, emphasised the importance of such missions for Ireland.

“Bringing stability to regions like Mali is critical to security, particularly in areas like the Sahel [western and northern Africa]. If we don’t succeed here in Mali and in Mauritania and right across the Sahel to South Sudan and Somalia, we will have challenges on Europe’s border in terms of the two vectors affecting Africa – climate change and population increase.

“Is is also about humanitarian rights, to ensure people don’t feel they have no other option but to go on very dangerous migration routes, being fleeced by criminality and [pushed onto boats] where many many have drowned.”

Mr Varadkar also placed such missions on a wider dimension.

“So many of the problems we face at home have an international dimension, housing, climate change, security threats.

“We need to be part of the world and engage with the world,” he said.

“We have been here in Mali as part of the EU training mission for five years now. Given the impact the region has on the rest of the world in terms of migration and being a sources of terrorism in some cases, in terms of climate change, there will be an Irish presence in Africa for quite a period to come.”