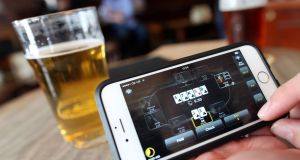 The amount of time people spend on their smartphones in pubs and restaurants is damaging Ireland’s hospitality culture, according to a Fine Gael Senator. File photograph: Chris Ratcliffe/Bloomberg

The amount of time people are spending on their smartphones in pubs and restaurants is damaging Ireland’s hospitality culture, according to a Fine Gael Senator.

Tim Lombard, who is a member of the Oireachtas communications committee, has warned that “the art of conversation” is being “eroded” in pubs and restaurants across the country due to the significant amount of time customers are spending with their eyes glued to their mobile phone screens.

“The Irish hospitality culture is fuelled by engaging conversation in our pubs and restaurants. We are known worldwide for being very sociable, being able to talk to the wall, and having the craic,” said Mr Lombard.

However, he believes the overuse of smartphones is damaging the State’s hospitality sector.

“The way I would equate it is like going to a pub and opening a newspaper and everyone had their own newspaper and nobody talked to anyone the entire time you’re in the pub,” he said.

Some Irish pubs have already decided to ban the use of smartphones, or are heavily encouraging their customers not to use them.

A spokesman for the Vintners’ Federation of Ireland, the representative body for more than 4,000 publicans, said: “While it’s neither desirable or possible to prevent the progress of technology, some venues have decided to ban smartphones. It’s up to individual publicans to decide what works best for their business.”

“It’s a similar situation to TV sports subscriptions – some pubs have found they can retain their core business without broadcasting Sky Sports in the background . . . Ultimately, customers will frequent pubs that best meet their needs,” he added.

Mr Lombard has also called for legislation to be brought forward that would require smartphone manufacturers to inform users about the amount of time they spend on their phones each day.

“The amount of information that they [phone manufacturers] have of our usage is very important. They need to give that information to us on a very regular basis, informing every user of the time they’re spending on their phones. And then people can make their own choice with the data in front of them,” said Mr Lombard.

He added: “At the moment, companies are doing it [releasing the information] off their own good back and on some devices only. All devices and all companies should be making that information available to consumers and then people can make informed decisions for themselves.”

Last year, Apple launched iOS 12, its latest update for its iPhone and iPad products, which gives users a detailed breakdown of the time they spend on their devices. However, this is only available on products with the latest software update.

According to a recent report by the World Health Organisation, spending too much time online and using modern electronic devices may cause social withdrawal and hinder the development of social skills.