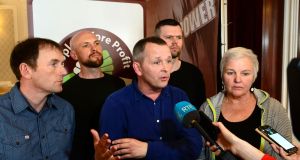 Cllr John Lyons has resigned from People Before Profit over “difficulties” with its leadership, he announced on Monday.

He said he would remain a councillor, and confirmed he would contest the upcoming local elections in May. The decision to leave the party “was not taken lightly nor quickly,” he said.

“The difficulties I’ve had with the leadership of PBP over the future direction of the party in the Dublin Bay North area over the past six months could ultimately not be resolved,” he said.

Today I announce my resignation from People Before Profit (PBP) with immediate effect.

I will continue in my role as a Dublin City Councillor representing the wonderful people of the Beaumont-Donaghmede local... https://t.co/znOVkzgVsm

Cllr Lyons had been a member of People Before Profit for 10 years. He came close to winning a Dáil seat in the Dublin Bay North constituency in the 2016 general election, finishing seventh in the tight five-seat race, and was eliminated after the 14th count.

Cllr Lyons said he would be launching a “new left-wing political initiative” in the north Dublin constituency, along with other local activists, in the near future.

People Before Profit has three sitting TDs; Richard Boyd Barrett, Gino Kenny, and Bríd Smith. The left-wing party is in a Dáil alliance with Solidarity, which also has three deputies.

The departure of Cllr Lyons leaves the party with nine sitting councillors, the majority of which have seats on Dublin local authorities.

Cllr Lyons said he would not be commenting further on his decision to leave the party.