Taoiseach says people should not protest outside centres that provide abortion 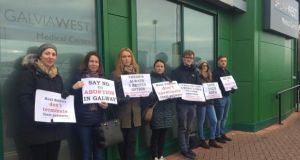 Anti-abortion protesters outside a GP surgery in Galway city on Thursday morning.

It is not right to protest outside hospitals or places where people are accessing medical services, Taoiseach Leo Varadkar has said.

Speaking in Bavaria, Germany, where is attending a conference of the Christian Social Union, the Taoiseach said: “I think first of all when it comes to abortion the people have spoken by a very clear majority.

“The Irish people decided that abortion services should be legal in Ireland and the Oireachtas passed the legislation as we know last year and the service is now available.

“Irish women don’t have to travel abroad anymore to end their pregnancies. There’s almost 200 GPs now providing the service across the country. And it’s my strong view that while I respect people who are pro-life, who oppose abortion, I don’t think anyone should be impeded when they’re trying to access a medical service.”

He said accessing a medical service “particularly for something like abortion is a very private, very personal thing”.

“If you think about it, somebody going through a crisis pregnancy is going through enough upset and turmoil without having to be exposed to more of it on the way into their GP’s surgery. It’s not a decision that I think any woman takes lightly, quite frankly.”

Asked if the Government would accelerate moves to bring in exclusion zones around facilities that are providing abortion services, Mr Varadkar said Minister for Health Simon Harris was working on such plans.

“We do have to strike the balance of course between protecting women and patients from being impeded entering a hospital or GP clinic and also not doing anything that unduly restricts free speech. So we have to get that balance right. But it’s something Minister Harris is working on and I know he’s very committed to doing.”