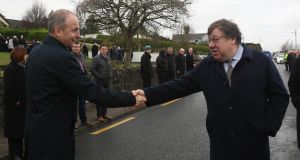 Former minister Mark Killilea was a “great people person” who “understood that to get things done you had to cross divides”, Fianna Fáil leader Micheál Martin told mourners on Thursday.

Speaking at the funeral of the former MEP in Belclare in Co Galway, Mr Martin said Fianna Fáil and Ireland owned a debt of gratitude to the Killilea family.

“A very active, gregarious man, and I can recall as a young student being mesmerised by the partnership of himself and Albert Reynolds in communications.

“It’s hard to credit now that at that stage one would be waiting months and months for a telephone connection. But Mark Killilea and Albert Reynolds changed all of that with their communication plan which transformed the country.

Mr Martin said Mr Killilea (79) was very effective as an MEP because he “had the capacity to get on with people, which is very important in European politics”. He served at as councillor, senator, Dáil deputy and MEP “and did it diligently... but also with a sense of achievement, a sense of duty, and also not forgetting the wider social side of life”.

Mr Killilea’s daughter Medbh said her father served his family, his community, his constituency and his country with distinction. “Dad grew up in a house of politics, farming and food and he fell in love with all three of them.”

She said he was a hard-working father who reared eight children with his wife, Anne, and he was devoted to his 11 grandchildren. Her father loved working hard as a farmer, agricultural contractor, auctioneer and politician, while he also loved playing cards, supporting the Corofin Gaelic footballers and Ballinrobe Races, and relaxing on holidays in Ballyconneely.

“Dad was a great character. He told us how to live life with great commonsense, a positive attitude and a twist of humour. As a politician he wasn’t afraid to use unparliamentary language to get his point across,” she added.

Former EU commissioner Ray McSharry said Mr Killilea was a man who got on with everyone.He said Mr Killilea understood the needs not just of farmers but people across all spectrums and Mr McSharry recalled Mr Killilea’s key role in getting Turks and Greeks to talk in the dispute over Cyprus.

“The European Parliament is a place for networking and where better could you get a fella like Mark Killilea for that job?” he said.

Mark Killilea is survived by his wife, Anne, and seven children: Eidín, Niamh, Deirbrin, Niall, Donagh, Medbh and Eimhín. He was predeceased by his son Mark, who died in a road crash in 2009, and by infant twin daughters.