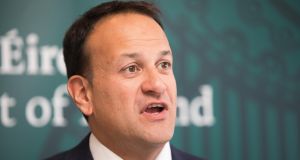 Taoiseach Leo Varadkar said he and German chancellor Angela Merkel both agreed to stand by the Brexit withdrawal agreement in a phone call on Thursday morning.

Speaking after a Cabinet meeting in Dublin, Mr Varadkar said he and Ms Merkel had a long conversation at her request.

“We spoke for about 40 minutes,” he said. “The conversation focused on securing the ratification of the withdrawal agreement which, as you know, will be put to the House of Commons in about two weeks’ time.

Planning for a “no deal” scenario has also been discussed by the Cabinet in Dublin.

“It was quite a long call, it was an opportunity to kind of brainstorm a bit as to what we could do to assist prime minister May in securing ratification of the withdrawal agreement,” the Taoiseach said.

There have been calls from the United Kingdom for clarifications that the backstop - the insurance policy to avoid a hard border even if there is no future EU-UK trade deal - will be temporary.

Mr Varadkar said the backstop was always only meant to hold “unless and until” a future trade deal that avoided a hard border was in place.

He said it would be “helpful” for other EU leaders to know what kind of assurances would command a majority in the House of Commons.

The Taoiseach said there would be contact between Irish and British Brexit officials on Friday, and he and UK prime minister Theresa May would speak afterwards if required.

“Those who create a problem must be the ones who have a responsibility to come up with a solution. It is up to them to make a proposal but it has to be a proposal that we can accept. So it can’t be a proposal that contradicts what is already in the withdrawal agreement.

“It can’t be something that renders the backstop inoperable, for example. We want to be in a position to give guarantees, to give assurances. We need to know what the United Kingdom parliament wants in terms of those guarantees and those clarifications.