Backstop letters between London and Brussels to be scrutinised

British prime minister Theresa May says the UK will be in “uncharted territory” if MPs reject her Brexit deal. A vote on the deal is earmarked for the week starting January 14th. Video: BBC's Andrew Marr Show 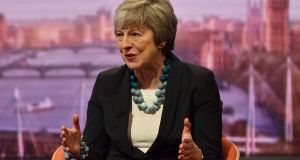 Britain’s prime minister Theresa May on the BBC’s “The Andrew Marr Show”: said she would work to secure further assurances from EU leaders on the backstop to assuage members of her Conservative Party and the DUP. Photograph: Jeff Overs/BBC/Handout

A formal exchange of letters between the EU and the UK, stipulating that the Northern Ireland backstop will be temporary and superseded by a comprehensive trade deal, is to be examined by officials as a way to break the Brexit impasse at Westminster.

The moves, likely to be approved by the Government, come as British prime minister Theresa May steps up efforts to secure the backing of the House of Commons for the agreement reached with the EU on the UK’s withdrawal.

Mrs May on Sunday insisted that the vote – postponed before Christmas – would go ahead next week, but the DUP, which props up her government, described the backstop as “the poison which makes any vote for the withdrawal agreement so toxic”.

Mrs May was sticking firmly to her position that the backstop – a mechanism that aims to ensure there is no hard Irish border should the UK not reach a deal – was a necessary part of the agreement. Her comments were welcomed by Taoiseach Leo Varadkar, who was speaking on the first day to a trip to Mali.

“One thing the prime minister said today which I think is very valid and I hope will be listened to is that avoiding a hard border between Northern Ireland and the Republic of Ireland is not just the case of people saying they don’t want one,” he said.

The Taoiseach said an agreement on “the same customs rules and full regulatory alignment” was required to avoid a hard border.

“We need more than good intent and warm words. We need a treaty that can give effect to the practical considerations,” he said.

Mrs May told the BBC she would work to secure further assurances from EU leaders on the backstop to assuage members of her Conservative Party and the DUP.

DUP deputy leader Nigel Dodds said that, following engagement between his party and Downing Street, “the fundamental problems which make this a bad deal appear not to have changed”.

Mrs May cautioned that between Tory MPs seeking “a perfect Brexit” and Labour MPs seeking a second referendum, “the danger there is we end up with no Brexit at all”.

Mrs May’s allies were continuing efforts to turn around huge opposition to the backstop among her MPs, with reports suggesting a variety of mechanisms, including consulting the EU Court of Justice on its temporary nature.

Irish and EU sources were clear that anything which affected the legal text of the withdrawal agreement would not be possible. The exchange of letters setting out each side’s understanding of the intended temporary nature of the backstop is said to be more realistic.

Some sources expressed scepticism that it would be sufficient to win over the DUP and Tory Brexiteers.

EU leaders are keen to offer Mrs May help in her efforts to pass the treaty at Westminster but are wary that any concessions or guarantees to the British would be “banked” and that Mrs May would return to Brussels seeking further movement, perhaps after losing next week’s vote.

Irish and EU sources believe that, even if she loses next week’s vote, Mrs May will continue to seek approval for her deal, returning to the House of Commons at a later date. Mrs May repeatedly refused to rule out such a move on Sunday.

Mr Varadkar dismissed the idea of Ireland having any role as a persuader in the debate preceding the crucial vote in the House of Commons next Monday.

“Ultimately the vote and decision by the British parliament at Westminster is a decision for them. You have to weigh up on the one hand our desire to see it ratified with the possibility that that could backfire if we were trying to tell another parliament, another country, how they should vote.”