Abortion: A big step on road to a referendum 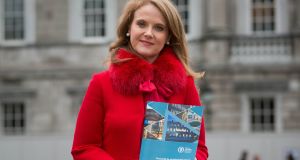 The Oireachtas Committee on the Eighth Amendment, chaired by Senator Catherine Noone, has formally recommended that Article 40.3.3 of the Constitution should be removed to allow for abortion up to 12 weeks. Photograph: Gareth Chaney/Collins

The decisive recommendation of the Oireachtas Committee on the Eighth Amendment has brought clarity to the kind of proposition the people will be asked to vote on next year.

The 40-page report by the committee has recommended that article 40.3.3 of the Constitution should be removed to allow for abortion up to 12 weeks. It is expected the Dáil and the Government will endorse this and that a referendum will be held before next summer.

The committee was not unanimous, with three of its 16 members issuing a minority report calling for retention of the amendment, but the big majority in favour of providing for abortion up to 12 weeks marks a sea change in Irish politics.

It seems that during the committee hearings the centre ground shifted, with some of those who favoured a limited liberalisation to cover cases of fatal foetal abnormality and rape being persuaded by the expert evidence that general availability up to 12 weeks is the most effective way of achieving this objective.

The number of Fine Gael and Fianna Fáil TDs who have been persuaded to change their minds on the issue reflects the seriousness with which the committee, under chairwoman Senator Catherine Noone, went about its business.In the past abortion has proved a politically divisive issue, particularly for Fine Gael, but the decision of the two big parties to allow their TDs a free vote has defused somewhat its potential to create serious political difficulties this time around.

Some surprise has been expressed at the decision of the Government to allow Ministers a free vote, but there is actually nothing new in this. When the referendum Bill proposing insertion of the Eighth Amendment into the Constitution back in 1983 was voted on by the Dáil, the then tánaiste, Dick Spring, and the minister for health, Barry Desmond, voted against although it was carried by an overwhelming majority.

This time around the referendum Bill to delete the Eighth Amendment is certain to engender a lively debate in the Dáil and Seanad, with widely differing views being expressed, but it is unlikely to provoke the level of venom that characterised the debate in 1983. Although there is a general expectation that a majority of TDs will support the referendum Bill, there is no guarantee that the electorate will follow suit. Voters have shown a willingness in the past to reject the advice of their political leaders and much will depend on the quality of the debate during the campaign.

There is a danger that many TDs from the two big parties will stand back from the fray and leave the debate to supporters and opponents of abortion. The TDs who back the change have a duty to follow through and campaign for it, as a hands-off approach could easily lead to the defeat of the proposal.