Abortion referendum will be both emotive and unpredictable 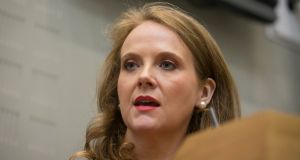 Senator Catherine Noone, chairperson of the Joint Committee on the Eighth Amendment of the Constitution, hailed the work of the committee as finding the voice of the middle ground on the abortion issue. Photograph: Gareth Chaney Collins

The publication of the report of the Oireachtas Committee on the Eighth Amendment marks the end of the second phase of the lengthy process of reforming Ireland’s abortion laws.

Now the focus moves swiftly to the Government, which will decide on what course of action to follow early in the New Year.

It is almost certain that the Cabinet will decide to push on to a referendum, accepting the committee’s report and asking the Minister for Health to prepare heads of a Bill – in other words, a summary of its intended purpose – which the Government would undertake to bring to the Dáil after a referendum.

Once the Government does that, the action will move to the Dáil, which the Government will ask to approve a referendum Bill. That is likely to happen in late January or early February. Once the Oireachtas passes the legislation calling for a referendum, a referendum commission will be set up to “referee” the debate – though, in reality, the debate started long ago.

The report is not a large piece of work. Excluding appendices, it runs to just 15 pages, including the final chapter of “ancillary recommendations” in which the committee deals with issues such as contraception, sex education and obstetric care.

Though brief, it is a highly significant document, likely to be remembered as such. It is also quite clear. It recommends straight repeal of the constitutional ban on abortion, and the legalisation of terminations up to 12 weeks, and beyond in cases where the woman’s life or health is threatened, and in cases of fatal foetal abnormality. It specifically rejects abortion on grounds of non-fatal abnormality.

If followed, it would legalise the vast majority of Irish abortions, which currently take place either at home through the use of abortion pills bought over the internet, or in UK abortion clinics.

The committee chairwoman, Senator Catherine Noone, on Wednesday hailed the work of the committee as finding the voice of the middle ground on the abortion issue.

Those who oppose abortion are likely to take issue with that idea. But the proposals will not please some campaigners for abortion rights, in that they suggest significant legal restrictions on abortion and do not simply hand the issue over to women and their doctors. The report explicitly rejects the more liberal recommendations of the Citizens’ Assembly.

However, senior figures in the broader Repeal movement are thrilled with the committee’s report – they privately admitted that something like this was the very summit of their realistic ambitions.

For the people, politicians and campaign groups that have been seeking a reform of Ireland’s abortion laws, things are going according to plan. The most difficult part of the exercise is still ahead; but they are motoring ahead.

For their anti-abortion opponents, the committee’s report represents another defeat. One of the most surprising features of the debates so far has been the political ineptness of the anti-abortion side.

Mattie McGrath, Rónán Mullen and Peter Fitzpatrick’s opposition to abortion is no doubt sincere and genuinely held. But it could hardly be said that they reached out to the middle ground during the committee hearings.

But the anti-abortion groups have been preparing for this battle for many years. They have money collected, networks built, research done, online campaigns prepared. Repeal supporters should expect their opponents to up their game. Though there has been, it is fair to say, little sign of it to date.

The specific rejection of non-fatal abnormality as a grounds for abortion removes from the anti-abortion side one of its more potent and emotive arguments: the (relatively) late abortion of foetuses with disabilities.

That having been said, the proposals are still a good deal more liberal than most politicians would have expected at the beginning of the process. Assuming the Government accepts the report, the referendum is likely to become a popular vote on abortion on request up to 12 weeks. It will be both emotive and unpredictable.