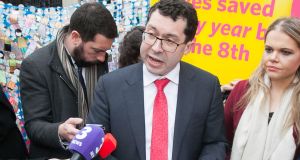 Speaking outside Leinster House Senator Ronan Mullen said the three members were “horrified by the cavalier way in which the committee majority voted to recommend widespread, legalised abortion, partly out of a desire to avoid figuring out how to deal with complex cases”. Photograph: Gareth Chaney Collins

Three members of the Oireachtas Joint Committee on the Eighth Amendment to the Constitution have called for a new citizens’ assembly to explore “the means whereby positive alternatives to abortion can be explored”.

Independent TD Mattie McGrath, Independent Senator Rónán Mullen and Fine Gael TD Peter Fitzpatrick – all of whom oppose abortion – did not sign off on the Oireachtas committee’s report as they did not agree with its findings.

The committee published its final report on Wednesday and the three dissenting members published their own “minority” report shortly afterwards, in which they widely criticised the work of the committee, its processes and its focus.

They said an “unacceptably flawed process” had led “inevitably to cruel and unjust recommendations”.

Their report claimed there had been an “extraordinary imbalance” in the lists of “invited guests in favour of abortion”.

The report also claimed the committee had voted “pre-emptively” when it decided the Eighth Amendment should not be retained in full.

On the recommendation of the majority of the committee that abortion be decriminalised in circumstances where abortion pills are self-administered or administered by a registered doctor, the three dissenting members said the committee had failed to “recognise the difference between an offence in law and the prosecution of that offence”.

They said there had been no prosecutions prior to or under the Protection of Life During Pregnancy Act 2013 for either women or doctors.

The offence under that Act, they said, existed “not to target women, but to deter people from doing something – procuring dangerous medications – that can be harmful to themselves and others”.

In their own analysis of international human rights law, the three minority members said constitutions were “the correct place” to secure and protect fundamental rights.

They said what they referred to as the “consistent pressure” from international bodies to “expand abortion in Ireland” lacked a basis in international law.

The three members recommended the Eighth Amendment be retained and that “this fundamental issue of human rights not be put to the vote”.

Secondly, they recommended a citizens’ assembly be convened to explore the means whereby “positive alternatives to abortion can be explored so as to fully respect and defend the rights of unborn children and their mothers and partners”.

The minority report also recommended that “the provision of appropriate perinatal and palliative care be provided in a consistent, high-quality manner across the country and that great public attention be drawn to this”.

Fianna Fáil ‘will hold back €1.2bn’ of €11bn available to next government 13:32
Mary Lou McDonald criticies Micheál Martin’s ‘cantankerous approach’ 13:30
Body found in search for fisherman Willie Whelan off Co Wexford coast 13:30
Dublin man found guilty of his father’s manslaughter 13:05
Labour vows to slash the cost of childcare by up to two thirds 12:56
SUBSCRIBER ONLY

1 Asylum claims by Georgians and Albanians brought to abrupt halt
2 Snow on the way as Ireland’s weather set to turn colder
3 Miriam Lord: Does anyone care if Leo smoked or snorted?
4 Fianna Fáil ‘will hold back €1.2bn’ of €11bn available to next government
5 Child (4) died of viral infection following nap at Cork creche
Real news has value SUBSCRIBE