‘Huge lack of understanding’ of abortion in Oireachtas

Inside Politics podcast: Catherine Noone on how committee backed repeal of Eighth Amendment 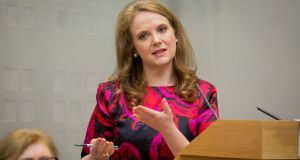 Chairperson of the Joint Committee on the Eighth Amendment of the Constitution Senator Catherine Noone. File photograph: Gareth Chaney/Collins

“It has been interesting, it has been surprising, it has been amazing, this process, to me. There’s a huge lack of understanding and knowledge in this area, most of all among the members of the Oireachtas. And I don’t mean that in a disrespectful way to my colleagues.”

On today’s Inside Politics podcast, chairperson of the Joint Committee on the Eighth Amendment of the Constitution, Senator Catherine Noone, tells Hugh Linehan and Pat Leahy how the committee came to its historic decision to recommend the repeal of the Eighth Amendment.

She talks about the two factors she considers decisive in leading the group to a more liberal position than expected – the “impossibility” of legislating for abortion in cases of rape, and the widespread availability and use of abortion pills by Irish women.

“Women are taking these pills up to 10, 11 weeks, in uncontrolled ways, not supervised by their GPs. I think when people start to appreciate why we came to the decisions that we did, that they are likely to perhaps support” the committee’s findings, she says.

Ms Noone defends the choice of witnesses who gave testimony, a step which was criticised as favouring the repeal argument by committee members with anti-abortion views, saying it is “quite difficult to get medics to come in to the Oireachtas and tell us that the status quo should be maintained”.

She expresses hope that a male-dominated Dáil will “engage” with the findings of the gender-neutral committee she has led.

“I suppose the question is, would we be having this conversation if men could have babies?” she asks.