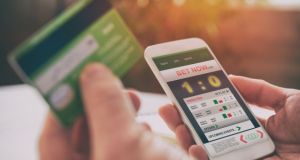 The party unveiled a policy paper on gambling on Tuesday which also committed it to severely restrict sports sponsorship and advertising by betting companies and to put a gambling regulator in place by the end of 2020, if it is brought into government.

The policy was launched by justice spokesman Jim O’Callaghan and by Mayo TD Lisa Chambers at its campaign headquarters in Dublin on Tuesday.

Whistle-to-whistle betting, or in-game betting, allows people to lay bets during the course of a sports game or event, and has been described by anti-gambling campaigners as an “accelerant” for gambling addicts.

Additionally, research in Britain has shown that one-in-five people who bet using credit cards are problem gamblers. The practice has been banned by the UK regulator.

“In the old days a man went into a bookies and the worst thing that could happen was he lost a week’s wages (which was bad enough) but now they can gamble with credit cards and money (they don’t have),” Mr O’Callaghan said.

He told the briefing that if elected, Fianna Fáíl will establish a gambling regulator which will be funded by a levy on the gambling sector.

He berated the record of Fine Gael saying that in nine years in government, and despite many promises, it had failed to advance legislation to establish an office of a gambling regulator. He said the industry remained completely unregulated in Ireland and this had to change as a matter of urgency.

“Gambling has become a serious problem that is destroying lives in Ireland. Children are being lured into gambling through online-video games that use loot boxes.

“Sport is in danger of being overwhelmed by the influence of gambling, with in-game betting promoting reckless behaviour and fuelling corruption

“After a decade of delays, we cannot afford to wait any longer. Vulnerable gamblers need to be protected. The gambling industry must be held accountable and forced into acting responsibly. We need to protect children from the insidious practice of drawing children into highly addictive online gambling through gaming.”

The Fianna Fáil proposals include powers for the regulator to oversee online and in-person betting, including age restrictions, gambling limits and cooling off periods.

He referred to the example of sports stars like former Armagh footballer Oisín McConville, who has recounted his own gambling addicition and has been a leading advocate for a clamp-down on unregulated gambling.

“The regulator will be specifically empowered to stamp out the sinister practice of luring children into online betting through loot boxes and other means. We will ban Loot Box gambling which targets children who are innocently playing online games and don’t understand how addictive these lucky-dip in-game purchases can be,” he said.

Mr O’Callaghan said he would be disappointed if the regulator was not in place by the end of this year.

Opposition to ‘grand coalition’ with FF strengthens in FG