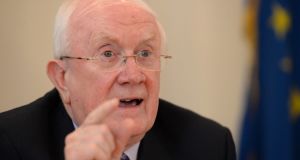 Donegal TD Pat the Cope Gallagher has contradicted Fianna Fáil’s official policy by saying he would personally prefer a coalition with Sinn Féin.

Fianna Fáil leader Micheál Martin has consistently said the party would not go into coalition with Sinn Féin.

Speaking on Raidió na Gaeltachta’s Adhmhaidin this morning, Mr Gallagher said his own personal view would favour a coalition with Sinn Féin.

He said that parties should not be worried about Sinn Féin because they were doing the same work as other parties in the 39 constituencies, to the benefit of society as a whole.

He disagreed with the view that Fianna Fáil and Fine Gael were similar – he argued that Fianna Fáil represented ordinary people throughout the country and in the Gaeltacht regions, while Fine Gael did not accord those demographics respect.

On the same station Pearse Doherty of Sinn Féin, who is also a TD for Donegal said many other TDs within Fianna Fáil had expressed the same sentiments privately, and a few publicly. He said they disagreed profoundly with the stance of Mr Martin on this issue.

He said Sinn Féin was prepared to sit down with every party. and every Independent TD to negotiate what he called a “republican programme for Government”.

A Fianna Fáil spokesman said the party could not be clearer in its refusal to enter into any relationship with Sinn Féin after the election or at any other time.

“Pat the Cope has acknowledged the party’s position and understands that it will not be changing,” he said.

“We’re actually very different in our political approach and political style. What we do have in comment is those of us who are elected and have a democratic mandate, we do have that in common,” she said.

“I would like us also to have in common a basic level of respect for the people who vote for us, and the likes of Fianna Fáil and Fine Gael saying they don’t want us, I would ask them to remember that behind every Sinn Féin elected representative Dáil deputy or councillor are hundreds of thousands of people who vote for us,” she said.