‘Small things can get you noticed, and that can translate into wider media coverage’ 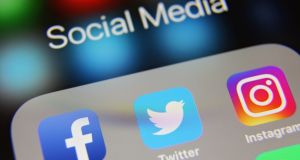 The expert view is that ‘this is a short campaign and there is a big opportunity, because the reality is most candidates won’t get to knock on a lot of doors’. File photograph: Getty

Younger voters live digital lives, have shorter attention spans, and are interested in issues not political parties, say experts. Consequently, politicians are trying to talk to them in ways that will mean their messages strike home.

Fine Gael has spent most in the last seven days, with €11,402 going on Facebook advertisements that promise to “revolutionise public transport” by building MetroLink and expanding Dart in Dublin.

People “are spending too much time stuck in traffic”, states one Fine Gael advertisement, as it pledges “more and quicker bus journeys”. Each of the adverts is short, between 14 and 18 seconds long.

Given that climate change features on younger voters’ concerns, and mindful of the Greens’ recent success Fine Gael is also targeting the “scourge” of plastic waste, promising a ban by 2021 on single-use plastic cutlery.

Equally, they are focusing on young families with lots of colourful images of babies and families opening boxes in new homes. But advertising habits can reveal what is not working just as much as much as the messaging that is.

Fine Gael online advertisements about Brexit and the economy were dropped by January 18th, just hours before a Saturday night poll claiming Fine Gael was 12 percentage points behind Fianna Fáil.

But the change in tack is interesting, nevertheless, coming after signals that Brexit and the economy are not dominating voters’ minds today. Now, the majority of Fine Gael’s “active” adverts are about childcare, health and transport.

In the last seven days, Sinn Féin has spent €1,141, focusing on a three-year rent freeze, scrapping the rise in the pension age and abolition of the Universal Social Charge on incomes below €30,000. Curiously, the Green Party has spent nothing on Facebook this week – at the time of writing.

So far, according to Craig Dwyer, a digital campaigns consultant who was social media director for the marriage-equality campaign, the quality of the online campaigning has been “lacklustre”.

“It is the small things that can get you noticed, and that can translate into wider media coverage. Some of the candidates are using crowd funding to drive their social media campaign, like the Greens’ Saoirse McHugh,” says Dwyer, who adds that social media can drive the national conversation “for good or for bad”.

The subsequently deleted Fine Gael “spoof video” of Fianna Fáil frontbenchers searching for policies “drove the agenda for that day’s election coverage”, he argues, though others would see that as an overstatement.

Meanwhile, the image of Cork East’s Fianna Fáil’s Kevin O’Keeffe standing next to a stretched limo complete with a rapidly attached O’Keeffe poster has left him explaining himself for days. Jokes backfire badly on social.

Public affairs consultant Ken Curtin agrees with Dwyer, saying that no party or candidate has made outstanding use of digital platforms and social media.

“It is much easier to see examples of the opposite,” he says. “I haven’t seen anything in the first week where I’ve thought that candidate gets it – that they are using the medium the way they should. That’s not to say that won’t change, but I haven’t seen any examples of it so far.

“This is a short campaign and there is a big opportunity, because the reality is most candidates won’t get to knock on a lot of doors.”

Trying to be too clever

But it is a brief window that will close rapidly.

Under pressure to succeed, political parties are “almost overthinking it”, he believes: “They are trying to be clever. That’s not how it works most of the time. It is about keeping it simple.”

Negative campaigning may work elsewhere, but not here.

“It just backfires. They should be talking about what their policies are and what they can do, not why the other crowd shouldn’t be left in control,” says Curtin.

He says marketing and communications and social media professionals have been brought on board, “but they don’t necessarily understand politics, which is a very different kind of an animal”.

Looking for successful examples, former blogger Suzy Byrne notes a short video by Labour’s Dublin South-West candidate Ciarán Ahern who has done a comic sketch where he makes clear that he is not ex-taoiseach Bertie Ahern.

To date, it has been viewed 20,000 times on Twitter, helping to build name recognition in a place where he had “little or none”, says Byrne.

“He’s just pointing out that he is not Bertie and not related to Bertie. People will get it.”

Social media can quickly backfire, she cautions. Indeed, it is just as likely to damage as it is to help when “punters use it against politicians”, as happened to Catherine Noone after her van was parked on a Killester footpath.

“That’s the sort of thing that will get you into more trouble than the message you post yourself,” says Byrne.