Tent containing homeless man was ‘checked verbally’ before being lifted

An investigation is underway after a homeless man was left in a serious condition when a utility vehicle removed his tent while he was sleeping it during a "tidy up" of the Grand Canal walkway at Wilton Terrace, Dublin 2. Video: Collins 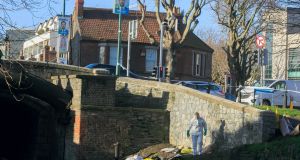 The scene in Dublin where a homeless man was injured during a tent clearing operation along the banks of the Grand Canal. Photograph: Gareth Chaney/Collins

Housing and homelessness have been catapulted to the centre of the general election debate after a political storm erupted over a homeless man being injured during a tent clearing operation along the Grand Canal in Dublin.

Four separate investigations are under way into the incident, which occurred on Tuesday near Leeson Street Bridge while clearance works were being carried out by Waterways Ireland.

It is understood a vehicle with a mechanical arm and claw was used to remove a number of tents from the area in the operation. An outreach worker from the Dublin Region Homeless Executive was present to provide people sleeping rough with information on accessing alternative accommodation.

Sources say a tent that was occupied was not opened but was checked verbally and there was no response from inside. The worker operating the vehicle was then given the go-ahead to move it. When it was lifted, however, movement in the tent was noticed and it was immediately returned to the ground.

The man inside was taken to hospital by ambulance. A Garda spokesman said he was in a serious but stable condition.

Opposition parties and campaigners said the incident demonstrated the extent of the State’s housing and homelessness problem, but the controversy intensified when Taoiseach Leo Varadkar sought to draw the Fianna Fáil Lord Mayor of Dublin Paul McAuliffe into the affair.

Asked about the incident by reporters at a campaign event in Monaghan, Mr Varadkar said he was “concerned” and called on Mr McAuliffe to make a statement about it.

Mr McAuliffe is a Fianna Fáil candidate in Dublin North-West in the general election. Mr Varadkar later denied that he had been attempting to make the incident political.

“No, I didn’t mention blame at all,” he told reporters. “I think it is reasonable that the Lord Mayor of Dublin, who is politically accountable for Dublin City Council, should also make a statement. I am sure he would be willing to do that.”

In response, Mr McAuliffe said he was “disappointed that the Taoiseach went down this road today”. He said he had asked for a report on the incident.

“It seems that the Taoiseach’s first thought was to play a political game,” he said.

Speaking at Government Buildings on Wednesday night, Mr Varadkar again expressed concern for the man injured, and insisted he was not trying to make a political issue out of the incident.

“It [homelessness] is a very complicated social issue that every country struggles with. I have never sought to make it a party political issue and I think, if anything, we have been on the receiving end of that rather than the perpetrators of it,” he said.

Fianna Fáil leader Micheál Martin said it was “extraordinary” that Mr Varadkar should seek a statement from the lord mayor after such a “tragedy”.

Minister for Housing Eoghan Murphy expressed his concern for the injured man.

“My thoughts are with this poor man as he recovers in hospital. I’ve demanded a full report in to the incident which is under Garda investigation,” he said in a post on Twitter.

“We see tents all over the city in recent years. It’s scandalous in itself. But for a man to be injured while he’s sleeping in his tent just because people want to clear the streets, somebody has to answer for this,” he said.

The Inner City Helping Homeless charity said this was not the first time that homeless people’s tents were disposed of without their consent or knowledge.

“While we are glad to hear that no one died, the fact that someone was seriously injured when their tent was removed as they slept in it is beyond disgusting.”