FF councillor calls on Martin to consider position as leader

Fianna Fáil has ‘no business looking at the formation of a government’, says John Paul Feeley 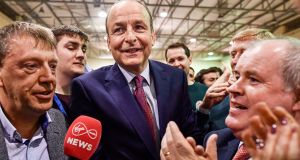 Micheál Martin of Fianna Fáil reacts to being elected to the 33rd Dáil on Sunday. Photograph: Jeff J Mitchell/Getty Images

Cavan county councillor John Paul Feeley said he was “baffled that Micheál Martin is still leader of Fianna Fáil after the result that we’ve had. We’ve been roundly rejected by the people in this election.”

Mr Feeley said the party had reduced its overall share of the vote and the number of TDs at a time when the government is unpopular.

“That has to demand that questions be asked, not just of the leader, but of the strategists that we allegedly have. We have the same secretary general since before 2011, when we had a meltdown . . . we’ve done nothing really, to rebuild Fianna Fáil.”

He said the party had not offered the electorate a realistic alternative to Fine Gael and Mr Martin’s claim to be a change candidate was not credible.

“I’m a sitting Fianna Fáil councillor, and I didn’t believe it. So I don’t expect most other people did, and the results are there to show for it. You can’t really be change if you have been in cabinet in one form or another since 1997,” he said.

Mr Feeley is a former election agent for Mr Smith and was involved in his Dáil campaign in this election. Mr Smith is expected to take the fourth seat in Cavan-Monaghan this evening. Mr Feeley did not confine his criticisms to the party leader, adding that the Fianna Fáil front bench has been “largely anonymous”.

“Fianna Fáil have no business looking at the formation of a government. You do have people looking for the lifeboat, who want to be at cabinet. Micheál Martin doesn’t want to be the first Fianna Fáil leader not to be taoiseach; I think he has a very poor case if he’s going to Sinn Féin to say he should be taoiseach, to be honest about it, in terms of our percentage vote,” he said.