Candidates of Rise, People Before Profit and Sinn Féin remain divided over whether a coalition with Fianna Fáil or Fine Gael would be the best course of action. 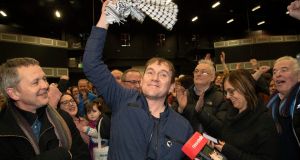 People Before Profit’s Gino Kenny pictured after he was elected on Monday afternoon at Citywest Count Centre. Photograph: Colin Keegan/Collins

There were tears of relief and jubilation in Dublin Mid West as Gino Kenny (S-PBP) was elected without reaching the quota to take the fourth seat.

The Neilstown-based Kenny had conceded defeat on Sunday morning as tallies indicated he would be, in his own words, “political toast”.

In a tweet on Sunday morning he said: “Not looking good in getting re-elected...Proud to have played a part in the legalisation of medical cannabis...For me activism doesn’t begin and end at Leinster House.”

He took 3,572 first preferences in the first count leaving him trailing in fifth place in the four-seater where the quota was 9,091. In a constituency that has traditionally returned two left-leaning TDs and two drawn from Fianna Fáil and Fine Gael, a seat for Solidarity-People Before Profit looked impossible. Sinn Féin ran two favourite candidates and picked up 40 per cent of first preferences here.

The party’s housing spokesman Eoin Ó Broin and Clondalkin-based Mark Ward easily took the first two seats. Mr Ó Broin polled 11,842 first preferences and romped home in the first count. Mr Ward was home on the second count, with 9,808 votes. Over half his surplus of 717 went to Mr Kenny (409).

As he was declared a TD he broke down in tears, hugging his campaign manager Cllr Madeleine Johannson and his partner Leah Speight, before holding his Palestinian keffiyeh (scarf) over his face and crying, explaining after that his over-riding emotion was one of relief.

Ms Higgins thanked her “incredible campaign team”. She agreed it had not been an easy election for Fine Gael. “There has been a seismic shift in politics and it’s going to be an interesting couple of weeks ahead,” she said.

The big story of the constituency was that of the country – the spectacular showing for Sinn Féin which won 40 per cent of the votes here. Dublin Mid West for the first time has three left-wing TDs out of four.

The defeated Mr Curran said he was “disappointed”, particularly for those who campaigned for him and voted Fianna Fáil. He had been a councillor here from 1999 and a TD since 2002, with a break between 2011 and 2016.

“Without any shadow of a doubt the move to the left has been specifically to Sinn Fein. Their vote at 40-odd per cent [in the constituency] dictated what was to come in the rest. They had more than the two quotas. Their surplus gave Gino Kenny a huge boost.”

He said he believed his party needed to “step back a little now and have a review of what the election told them. It wasn’t a bad election for Fianna Fáil but we didn’t achieve as a party what we might have hoped.”

He believes Sinn Féin leader Mary Lou McDonald should talk first to left-wing parties and groups before talking to either his party or Fine Gael.

“Let her talk to [left] parties, see how that develops and afford the [Fianna Fáil and Fine Gael] parties, and the leaders of the parties, a little bit of space and time.”