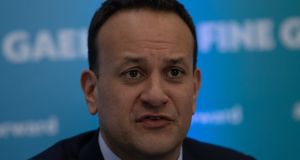 Taoiseach Leo Varadkar has served as minister for transport, for health and for social protection

It’s been a rollercoaster four years for Leo Varadkar (41) who topped the polls in 2016 and organised a spectacular military-style campaign to win the Fine Gael leadership in 2017 and the job of taoiseach.

Quick thinking and dynamic, he surfed a wave of popularity, but the electorate’s loyalty has withered.

Voters have given Fine Gael a “wallop” in this election but the Taoiseach’s blushes have been saved, likely in part because of his assured performance in the last TV debate.

The party had been well behind in the polls but pulled back in the last few days, helped by his more humble demeanour and pithy comments.

The socially liberal but economically conservative TD helped secure a Yes vote in the referendum to repeal the Eighth Amendment on abortion, a move that transformed the social agenda in Ireland but alienated some of his party’s base.

Ireland’s first openly gay minister, the son of an Indian father and Irish mother, he qualified as a doctor and lives in Castleknock. He served as minister for transport, for health and for social protection but is seen as a manager rather than an innovator.