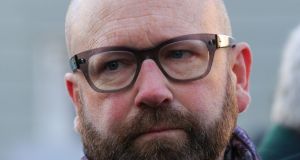 Ged Nash: ‘I would be burying my head in the sand if I said it has been a great weekend for the [Labour] party; it hasn’t.’ Photograph: Gareth Chaney/Collins

The three men were elected on the 10th count with transfers from eliminated Green Party candidate Mark Dearey. They join Sinn Féin’s Imelda Munster and first-time Dáil candidate Ruairí Ó Murchú who were both elected on the first count with 42 per cent of the vote.

Capping a bad day for Fianna Fáil, the result in Louth is the first time that the five-seater constituency has not returned a Fianna Fáil TD since the party was formed.

Mr Nash benefited the most from the Green Party’s transfers, taking 3,021 from Dearey in the final count, while Fitzpatrick received 1,791 and Mr O’Dowd 1,123.

Overall, Fine Gael secured 15 per cent of the vote in Louth, while Fianna Fáil secured 14 per cent, down four points on the performance by the two parties in the 2016 general election.

Mr Nash, a resident of the town, said that while he was delighted to win back the seat he lost four years ago, his celebrations were “tempered” by the loss of high-profile Labour seats including former leader Joan Burton’s.

“I would burying my head in the sand if I said it has been a great weekend for the party; it hasn’t,” he said.

Fitzpatrick told The Irish Times he believed Fine Gael did not realise “how hard they hurt people especially people on lower incomes” as the housing and health crises deepened.

“This is a kind of warning for future governments that you have to start listening to people,” said the former Louth Gaelic football manager.

“People will only be hurt so much and then when people get really, really hurt they get their vengeance back. Fine Gael learned nothing in the last number of years.“

Mr O’Dowd said that Fine Gael had a “tough battle” competing with Mr Fitzpatrick, his former party colleague, in ”a difficult county” on the Border for the party.

The lesson learned from the election was that there needed to be a “gentler, kinder Ireland.”

“The message is that we have to think more about the lives of ordinary people, particularly those who are disadvantaged, in poverty and sick. We also have to look after young people in terms of their housing needs,” he said.

Mr Breathnach spoke emotionally to the crowd gathered at the count centre in Dundalk after conceding defeat.

“Every dog has its day. I spent 30 years in politics, half my life. But to the victors, the spoils,” he said.

He received a warm round of applause at the count centre and was comforted by the winning candidates Mr Nash and Mr O’Dowd as he fought back tears.