Dublin West candidate is elected on the sixth count 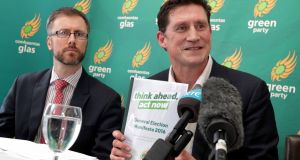 Roderic O’Gorman (38) won the last seat in Dublin West after a closely fought contest with Solidarity TD Ruth Coppinger. Mr O’Gorman, who hails from Tyrellstown but lives in Blanchardstown, paid tribute to Ms Coppinger and former tánaiste Joan Burton who lost their seats.

Mr O’Gorman said they had a “massive impact both locally and on national politics and despite my own happiness it’s a real sadness to see them both lose their seat today”.

Mr O’Gorman embraced his long-term partner Ray Healy on his victory in the sixth and final count. Elected to Fingal County Council in 2014 he retained his seat last year.

It is his 10th election in 15 years including four general elections, two byelections and four local elections.

He lectures at the Brexit Institute and School of Law and Government in DCU, specialising in EU, climate change and planning law.

Outside politics his interests include swimming, keeping fit and cycling. He said he would travel by train and looked forward to seeing the Maynooth line being upgraded to a Dart-style line.