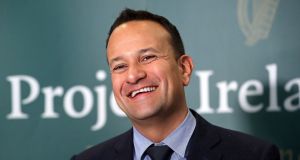 Leo Varadkar rushed across after his session in the House. Why, with all he has on his plate, he felt the need to be present at a bread and butter ministerial event announcing a road-building project in Mayo was a mystery. Photograph: Niall Carson/PA Wire

It was all kicking off on Tuesday afternoon.

Bloomberg reported from Brussels that negotiators were “closing in” on a draft Brexit deal. This nugget dropped minutes before Leo Varadkar began closing in on the Italian Room in Government Buildings with a view to holding forth.

The Tánaiste, fresh from a meeting of EU foreign ministers, had paid a flying home-to-brief-the-boss visit and was now closing in on Belfast on his way to yet another Brexit meeting.

Back at base, the domestic press corps was joined by representatives of the international media, wondering if Leo Varadkar would announce a deal. Closure, of sorts, at long last.

“Key Brexiteers have gone into Number 10 . . . now expecting a press conference any minute from Varadkar as well . . . for what, we don’t know yet,” tweeted the BBC’s Laura Kuenssberg in London.

But our reporter Fiach Kelly was on the spot in Dublin with the answer.

“The N5 Westport to Turlough road!”

Especially if your name is Michael Ring.

Everyone was pure weak with the excitement, and that’s not including the Minister for Mayo, who was reportedly on the verge of passing out earlier on but managed nonetheless to put in a superhuman effort to show up for the big reveal.

It wasn’t much of a reveal because Ringo was already up on the social media starring in a video shot on the side of a busy road with him bellowing above the traffic about the fantastic new road while avoiding being mown down by a lorry.

The Taoiseach also let the cat out of the bag in the Dáil, announcing the commencement of the new Westport to Turlough road as one of his Government’s many triumphs on the transport front.

As a young country, he said, Ireland doesn’t have the infrastructure of places like London or Paris. But “things are now really kicking off in terms of transport investment”.

Will be the single largest ever Govt investment in Mayo & will have transformative effect on the county.

20.3 km of dual carriageway from Westport to Turlough & 2.5 km link to the N59. pic.twitter.com/px5jJxZJiy

Which is great, but would his later appearance at Government Buildings be a sign that things were finally kicking off in the Brexit department?

The media had been lured to Merrion Street with a mildly enticing “Government to make significant infrastructure announcement” email, no further details attached, followed by the real draw: “An Taoiseach, Leo Varadkar, will attend if scheduling permits.”

Where did we see that before? Why, last week, when a similarly vague missive issued with the promise: “The Taoiseach may also attend subject to his availability.”

Funnily enough, it transpired Leo was available last week and, luckily, he was available this week too, which was convenient as the rest of Europe wanted to hear his latest take on the evolving Brexit situation.

It being a Tuesday, Leo had to rush across from Dáil Éireann after his usual session in the House. Why, with all he has on his plate, he felt the need to be present at a bread-and-butter ministerial event announcing the green light for a road-building project in Mayo was a mystery.

In precisely the same way it was a mystery when he felt the need to turn up at a routine ministerial announcement about an electricity link between Ireland and France the previous week.

“I’m confident we will have many more announcements like this before we go to the polls.” Every Tuesday, for starters, by the look of it.

No harm, though, in wheeling out the fancy lecterns for the Taoiseach and garnishing him with a few Ministers as a reminder of his statesmanlike deportment on the international stage in recent months. He’s very presentable. Clearly, this is the Leo Varadkar the electorate like to see, as the latest Irish Times opinion poll bears out.

And sure, if there are rumours of a general election in the offing to be denied with gung-ho sincerity while blaming Fianna Fáil for fuelling the speculation in the first instance, why not do that as well?

Meanwhile, Simon Coveney was in the chamber for Leaders’ Questions. The poor man needed the rest.

A few hours earlier he was in Luxembourg doing interviews and shootin’ the breeze with his homie Michel Barnier (check out the cool bro handshake between the two). He returned to Dublin later in the morning and briefed the Taoiseach on the Brexit state of play.

Following his brief respite in the chamber and a sobering hour listening to the real issues – “It is a fact that it has been raining in Kerry for at least seven weeks – Danny Healy-Rae” – the Tánaiste and Minister for Foreign Affairs hit the road again. This time for Belfast.

It was all kicking off.

Simon comes over as a very meticulous and thorough individual. One imagines when he briefs somebody on a particular issue, he leaves nothing out. And there is nothing he doesn’t know about Brexit. Leo will have been well briefed before he left to go north.

So once the announcement about the new road was out of the way – Minister for Transport Shane “Winston Churchtown” Ross was most gracious about it in the few minutes he got to speak and Ring was so delighted it rendered him uncharacteristically subdued – the questions began. It was all about Brexit and related questions about a Brexit-induced general election.

Apart from being cautiously optimistic about the ongoing negotiations, the Taoiseach had very little to say. But he was happy to stand in front of the cameras and say it.

“In terms of Brexit negotiations I’ve a confession to make. Tuesday is a pretty crazy day and I’ve spent the morning at Cabinet and the afternoon in the chamber so I’ve to go back to the office now and get a briefing from Brussels.”

Poor Simon. Talk about a kick in the teeth. Then again, it was the very same last week when Leo made an unexpected appearance at a minor gig. He got out the message that while he hadn’t seen what were called “non-papers” from the UK side, he wasn’t happy about them.

This time, while not knowing very much, he still got out the positivity line.

And perish the thought he was going to this announcement because an election is in the offing.

“I’m confident we will have many more announcements like this before we go to the polls.” Every Tuesday, for starters, by the look of it.

Ring was delighted. Speaking as somebody who “was born and reared” in the west of Ireland he was very happy to see this new stretch of the N5 getting the go ahead. “For 25 years I’ve been lobbying for this road.”

“There’s a lot of happy people in Mayo today,” he declared.

Not least Enda Kenny. He should be happiest of the lot, given that he announced the project as part of the six-year Capital Plan in 2015 and made sure to ring-fence the money before leaving office.

The Taoiseach name-checked him in the supplied press release, but he wasn’t mentioned at the press conference. On the big day, after all his effort, the big announcement went ahead without him.

Enda was in Tokyo when it finally kicked off.