The Government won the final vote on the Protection of Life During Pregnancy Bill 2013 by 127 votes to 31. 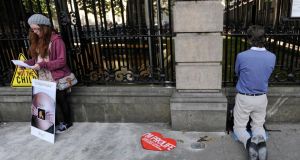 An anti-abortion protestor prays outside the Dail tonight as the amendments to the Protection of Life During Pregnancy Bill are debated. Photograph: Dave Meehan 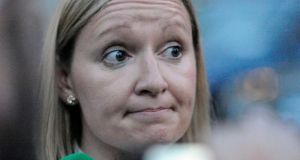 Lucinda Creighton gives an interview on the plinth outside the Dail last night after voting against the Government’s abortion legislation. Photograph: Dave Meehan 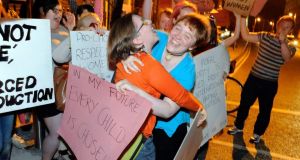 Pro-choice campaigners celebrate as news of the voting in Leinster House comes through. Photograph: Dave Meehan

The Government has won the final vote on the Protection of Life During Pregnancy Bill 2013 by 127 votes to 31.

Fine Gael’s Lucinda Creighton voted against the Government on the abortion legislation. Following an incorporeal Cabinet meeting last night – the first of the current Government - Dublin TD Paschal Donohoe was appointed to replace her.

In a statement Mr Kenny said “on my nomination, the Government has appointed deputy Paschal Donohoe as Minister of State for European Affairs.”

Mr Kenny said he was sure Mr Donohoe would make an excellent Minister of State and would make an “important contribution to the continued enhancement of Ireland’s role in the EU”.

Former Labour minister Roisin Shortall abstained on the Bill. Former Labour TD Colm Keaveney voted against as did five independents and Socialist Party TD Joe Higgins, because they believed the legislation did not go far enough.

Tanaiste Eamon Gilmore was in the US, while Independents Noel Grealish and Maureen O’Sullivan and Fine Gael’s Nicky McFadden were absent.

There was a round of applause after the vote was passed and pro-choice supporters outside Leinster House cheered at the result. The legislation will now be discussed by the Seanad on Monday.

Earlier, Minister for Health James Reilly said the criminal sanction for procuring an abortion will be reduced from penal servitude for life to a maximum of 14 years under the Protection of Life During Pregnancy Bill.

In the final vote on an amendment, Dr Reilly rejected opposition appeals to decriminalise the procurement of an abortion and said it was essential to have a penalty to uphold the Constitution.

The Government won this vote by 110 to 13. Fianna Fáil and Sinn Fein TDs abstained as did Ms Shortall and Colm Keaveney. Ms Creighton voted with the Government.

Earlier, Ms Creighton voted No in a section of the Bill on the risk of loss of life from suicide and was automatically expelled from the parliamentary party.

Speaking to reporters on the plinth of Leinster House tonight, Ms Creighton said she felt very sad as she had been a member of Fine Gael since she was 18.

“At the same time I am relieved because this is a huge issue that has been weighing on everybody’s mind for months,” she said. “It’s no exaggeration to say that a lot of people have really struggled on which way they would vote in this legislation and now obviously five members of the Dáil from my parliamentary party [will not support it].”

Ms Creighton said it was a “big shock” to find herself no longer a member of the Fine Gael parliamentary party. She also confirmed she would resign as a Minister immediately.

Asked if there was a route back to Fine Gael for her, she said it was hard to know what the future held, but she remained a member of Fine Gael and would continue to work with her local organisation in Dublin South East.

Ms Creighton talked to the Taoiseach as she left the Dáil chamber. Asked what she had said to him, she said: “I wished him luck. I have worked in his Department [for two and a half years].

“We have a great relationship, I have the height of admiration for him and how he conducts his business particularly on the European stage. He has done a huge amount to rebuild the stature and credibility of this country.”

Asked about Fine Gael’s pre-election commitment on abortion, she said: “I know in my own mind we made a clear commitment before the last election. I repeated that commitment, I meant it and held it sincerely. This legislation is a breach of that commitment.”

She said promises matter and on such a fundamental issue, she could not in conscience support what was proposed.

The Dublin South East TD voted on the amendment proposed by five TDs including two Fine Gael TDs who have lost the party whip - Billy Timmins and Terence Flanagan.

The amendment was also proposed by Fianna Fail’s Eamon O Cuiv, Independent Mattie McGrath and Sinn Fein’s Peadar Toibin, who faces disciplinary procedures from his own party over his opposition to sections of the Bill.

Their amendment proposed deletion of the entire section nine of the Bill on the risk of loss from suicide.

Earlier, Ms Creighton renewed her call for abortion time limits to be introduced where a foetus is viable.

She said she wanted to protect viable life and bring in limitations on when terminations could be carried out. “It would actually allay the genuine concerns of many of our citizens,” she said during the report stage debate, which resumed this evening.

“We know that in the vast majority of jurisdictions around the world where there are abortion regimes in place, far more liberal regimes of the type I hope we never see in this country, they do still enforce gestationsal limits, term limits for carrying out abortions,” the Dublin South East TD said. “I think that this is the minimum our citizens deserve.”

Fianna Fail health spokesman Billy Kelleher said he would oppose legislation if he thought for a moment if he somehow though that a baby at 34 weeks would be taken from the womb and destroyed.

Mr Kelleher said that if they talked about gestational limits, “we are pitting the life of the woman against the life of the baby” and “that would be repugnant to me and to the Constitution”.

Minister of State for Health Alex White said there was no answering Mr Kelleher’s point.

Fine Gael TD Peter Mathews, who has already lost the party whip on the legislation, also supported term limits. He said termination at 12 weeks was just as repugnant as a termination later in pregnancy.

Earlier, the Minister moved a series of amendments which, he said, gave clarity to the medical definition of terms “in good faith” and reasonable opinion” in the Bill.

Last night’s session began hours after the High Court refused to grant an injunction aimed at stopping provisions of the Protection of Life During Pregnancy Bill being voted into law.

The ex parte application was made by Jane Murphy, with an address at Milltown, Dublin 14 yesterday afternoon. She is expected to appeal Mr Justice Nicholas Kearns’ refusal to the Supreme Court.

Mr Justice Kearns said he was satisfied he had no jurisdiction to grant any such relief.