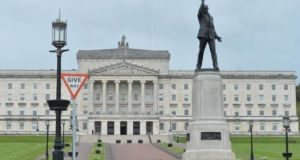 Alliance Party leader Naomi Long has described as a “peversion of democracy” the DUP’s use of a veto over a proposal to extend lockdown restrictions in the North by two weeks .

Ms Long said she has never been as disappointed about politics in the North over 20 years as she had been in the past week.

The North’s Executive has agreed to a one-week extension of Covid-19 restrictions following days of bitter division among ministers.

Four of the five parties in the Executive – Sinn Féin, the SDLP, Alliance and the Ulster Unionist Party – backed a proposal tabled by the minister for health, Ulster Unionist Robin Swann, to extend the current regulations for two weeks.

That proposal was on the advice of the North’s chief medical officer, who is understood to have advised that any easing of the restrictions would cause “excess deaths”.

However, a contentious Stormont mechanism – a cross-community vote – was used by the DUP to effectively veto the proposal, as well as a later fall-back suggestion by Mr Swann that the measures be extended for only one week.

It was later agreed “circuit-breaker” restrictions would be extended by one week with partial reopening of the hospitality sector next Friday.

Reacting to the political developments, Ms Long told RTÉ radio’s Morning Ireland it was shameful and embarrassing to see such tactics being played out while trying to govern in a pandemic.

The veto used by the DUP this week to oppose a proposal to extend restrictions was a flaw in Belfast Agreement, she said.

It diminished the role of those who were not Unionist or Sinn Féin, Ms Long said. “This was designed to protect minorities from majoritarian rule; the degree of perversion of its original intent has been laid bare for all to see.”

Using the veto this way was completely inappropriate and “a perversion of democracy”.

“We cannot do government while one party behaves this way,” she said.

Ms Long said the compromise she had voted for was an uneasy compromise. It had not been a case of choosing good versus better, it was bad versus worse, she said.

The Alliance party leader warned the Executive had a lot of work to do to prove itself fit for purpose – and that there was a danger it would not be sustained and people would ignore it.

Dr Tom Black, British Medical Association Northern Ireland chairman, said: “The national response to a situation like that would be to bring in a further lockdown, to make that more severe, yet politicians have decided to ease restrictions over the next two weeks and open up society.

“That decision is incompetent and negligent and saying to the healthcare workers that ‘we are abandoning you,’ he said.

“If the healthcare workers thought that they had been betrayed by the Executive, I think that would be a reasonable stance to take.”

A total of 78 deaths involving Covid-19 occurred in the week from October 31st to November 6th, and the overall toll has reached 1,141, official statistics showed on Friday.

On Thursday, at the 11th hour, a deal was struck by the Executive to end the deadlock over exiting the current coronavirus circuit-breaker.

Hair and beauty salons and premises without an alcohol licence like cafes and coffee shops can reopen next Friday, with hours restricted to 8pm. Driving lessons can resume by appointment only. Restaurants, pubs and hotels can lift shutters on November 27th. Pubs and bars will be permitted to sell sealed off-sales from November 20th.

Sinn Féin voted against the successful proposal because it ran contrary to the guidance from Stormont’s medical and scientific advisers to extend the circuit-break in its entirety for two weeks.

It was outnumbered around the ministerial table as ministers faced mounting public criticism over the delay.