‘The structure is legally sound but it never has been utilised,’ Brendan Howlin believes 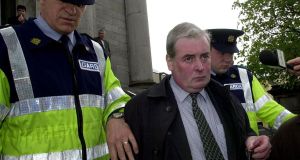 Judge Brian Curtin: Politically and morally, parliament could not allow a judge surrounded by such a cloud to continue sitting on the bench. Photograph: Eric Luke

There have been three occasions in the past where the possibility of a judge being impeached was raised in the Oireachtas. But on each occasion the judge retired before a process could be started.

In 1941, a motion was tabled for a Circuit Court judge, Edward McElligott, because of alleged incapacity. The motion was not proceeded with as the judge retired.

The issue next arose in the late 1990s following the Sheedy affair. Two judges, Hugh O’Flaherty of the Supreme Court and Cyril Kelly of the Circuit Court, were involved in the relisting of the case of a young architect, Philip Sheedy, who was imprisoned after killing a young mother while drink-driving. It led to his early release from prison.

Both judges resigned before any motion could be tabled. But it caused a constitutional crisis and it was then that a judicial council was first seriously mooted, to deal with disciplinary matters in relation to judges. Now, after two decades, that apparatus is still not fully in place.

It also raised another issue, the fact that the impeachment process under Article 35.4 of the Constitution had never been done in the Dáil and Seanad, or indeed had ever been tested in the courts.

It states that a judge “shall not be removed from office except for stated misbehaviour or incapacity and only upon resolutions passed by Dáil Éireann and by Seanad Éireann”.

The issue was finally addressed in a comprehensive way in 2004 when trying to deal with the removal from office of a Circuit Court judge, Brian Curtin. Gardaí raided the home of a Co Kerry judge in 2002 after receiving a tip-off from US law enforcement agencies that he was one of a number of Irish people with child pornography on their computer.

However, Curtin’s trial collapsed because the warrant used was a day out of date. Politically and morally, parliament could not allow a judge surrounded by such a cloud to continue sitting on the bench.

Michael McDowell who was then minister for justice brought a motion under Article 35.4 to remove him from office on the grounds he was “unsuitable to exercise the office of a judge of the Circuit Court”.

It led to protracted legal challenges. Curtin insisted his computer had been infected by malware. It culminated with the Supreme Court ruling that the Oireachtas could demand he hand over his computer.

The court also made a number of other rulings. The first was the Dáil and Seanad would have to sit separately to hear the case against him, and would then have to meet again if they found against him to decide if his offence merited dismissal.

In the event, Curtin retired on health grounds before the process could properly get under way. What was determined were the steps in the process. The first was a committee could be formed from each House which would essentially gather all the relevant information. It would not be allowed to reach any conclusions or make any findings, or make a recommendation.

“That was the blueprint that now informs the Standing Orders,” says Labour’s Brendan Howlin, who was involved in the deliberations between 2004 and 2006, and is an expert on Oireachtas procedures. “The structure is legally sound but it never has been utilised.

“This is all new territory and there are net issues that will need to be determined. What does ‘stated misbehaviour’ mean? That’s a legal definition that needs to be determined by politicians. In Irish it is ‘mí-iompar’ which has a deeper meaning and relates to comportment.”