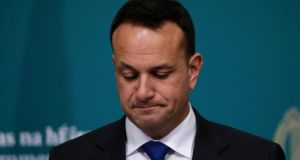 Tánaiste Leo Varadkar will make a statement in the Dáil in relation to leaking of a document about a GP pay deal to a rival organisation of doctors. Photograph: Crispin Rodwell

The Government has rejected efforts by Opposition whips to extend the time allotted for the Dáil exchanges on Tánaiste Leo Varadkar’s leaking of a copy of a draft contract to a friend.

With Mr Varadkar facing difficult questions over the reasons and circumstances behind his decision in April 2019 to pass on a draft of the GP contract to Dr Maitiú Ó Tuathail of the National Association of General Practioners (NAGP), the Government chief whip, Jack Chambers ,refused to yield to requests to increase the time allowed for questions.

It came as spokespeople from Opposition parties again castigated Mr Varadkar for what they described as a “serious breach” of trust and questioned his motive in doing so.

The statement from the Tánaiste, to be followed by a questions-and-answers session, is scheduled to start at 4.10pm and last for 90 minutes.

At the meeting of the Dáil’s business committee this morning, Sinn Féin whip Pádraig Mac Lochlainn proposed more time for the Opposition than the 10 minutes allotted to each party and group. The proposal was supported by all other Opposition parties.

The Government has refused to alter the schedule, however, and it is now likely the matter will be pressed to a vote at Order of Business this afternoon.

Earlier Mr Varadkar privately thanked Ministers for their support and for “doing the difficult interviews” in an early morning meeting today.

Fine Gael Ministers met before the weekly Cabinet meeting this morning where Mr Varadkar is understood to have addressed the controversy over a leaked document that he sent to a friend who was the head of an organisation for doctors.

Sources at the meeting confirmed Mr Varadkar thanked Fine Gael Ministers for their support and for “doing the difficult interviews” and asked for their advice about how to approach the Dáil debate later today.

A number of Ministers provided advice on how to approach the statement that Mr Varadkar is due to deliver after 4pm.

The Tánaiste did not address the issue in the subsequent Cabinet meeting, it is understood.

Sinn Féin spokesman on health David Cullinane said on Tuesday afternoon that the leak was a very “serious breach” and the onus was now on Mr Varadkar “to make it very clear his actions were inappropriate”.

“He’s an experienced politician. He was the head of government at the time. In my view it was very clear to me that he knew that this was wrong. He knew it was not the appropriate thing to do,” he said.

Mr Cullinane said it seemed to him there was an “old boys’ network” at play with Mr Varadkar doing a favour for a friend, rather than trying to bring as many GPs on board as possible.

“Then perhaps we could all move on. We cannot stick to this line he was trying to get further support for this deal and at the same time say the deal was in the public domain.”

He said Labour will be asking a number of questions about the nature of the friendship with Dr Ó Tuathail, his relationship with the NAGP and his knowledge of the association.

“If (Mr Varadkar) sticks to the line he has currently stuck to then I think this is going to continue to be a problem for him and for the Government,” he said.